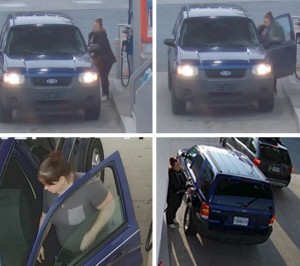 As an update to the release below, please be advised that at 8:28 p.m. on October 26, members of the Halifax Regional Police West Quick Response Unit with the assistance of Halifax District RCMP, arrested a 35-year-old woman from Lower Sackville without incident at a residence in the 0-100 block of Seawood Avenue. She was transported to HRP headquarters and later released. She is scheduled to attend Halifax Provincial Court on November 30 to face numerous theft related charges.

Halifax Regional Police and Halifax District RCMP would like to thank the public for their assistance in this matter as it was because of the numerous tips received, that the suspect was able to be identified and ultimately arrested.

Halifax Regional Police and Halifax District RCMP are seeking the public’s assistance to identify a woman responsible for a string of gas and dashes throughout the municipality since early August.

Police are releasing photos of the woman and her vehicle. She’s described as a white woman, 20-30’s, with dark, sometimes reddish-coloured hair usually worn up. In each incident, she was driving a blue Ford Escape, with a stolen license plate number FDA 175.

Police are asking anyone with information, or anyone who can identify the woman or her vehicle to contact police by calling 902-490-5020. Anonymous tips can be sent to Crime Stoppers by calling toll-free 1-800-222-TIPS (8477), submitting a secure web tip atwww.crimestoppers.ns.ca or texting a tip – Tip 202 + your message to 274637.