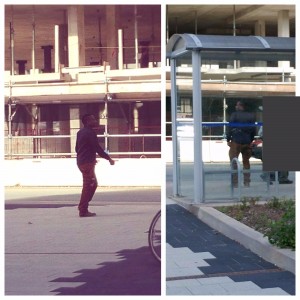 Update: This suspect has been identified and arrested.  Last night at 8:50 p.m., members of the West Quick Response Unit arrested a 30-year-old Halifax man without incident in the 500 block of Herring Cove Road. He was transported to police headquarters. He has been charged with assault causing bodily harm and was later released. He is scheduled to appear in Halifax Provincial Court on November 21 to face this charge

On October 2 at approximately 1 p.m., police responded to an assault that had just occurred at the corner of Spring Garden Road and Queen Street. The victim, a 36-year-old man from Halifax, advised he was walking in the area when he was approached by an unknown man who proceeded to punch him repeatedly in the side of his head. The suspect was observed leaving on a Route 1 Halifax Transit Bus. Police checked several buses but were unable to locate the suspect. The victim sustained non-life-threatening injuries and attended the hospital for treatment.

The suspect is described as a black man, ages 20-40, medium build with short dark hair. At the time of the assault he was wearing a black jacket and tan cargo pants.