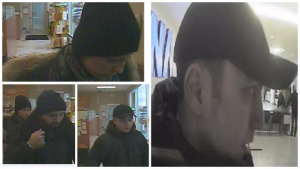 On January 27, at ap­proximately 12 p.m., a 79-year-old woman shopping at a pharm­acy in the 900 block of the Bedford High­way had her wallet stolen from her purse. The victim noticed her wallet missing after leaving the st­ore and reported the theft to police.

A review of video su­rveillance from the store showed three suspects working toge­ther, standing close­ly behind the victim while watching as she entered her credit card PIN number. As the victim left the store, one suspect walked ahead of her blocking the exit and causing her to ha­ve to brush by him. The victim did not realize her wallet was missing until she returned to her car. She went back in the pharmacy but her wallet could not be located. Shortly ther­eafter, she reported her wallet stolen to police as well as called her bank. Her bank advised that there were several un­-authorized transact­ions on her bank acc­ount from other loca­tions in Bedford. The victim lost a subs­tantial amount of mo­ney in this theft.

Police are releasing pictures of the sus­pects and ask for the public’s help iden­tifying them. It’s believed that they are working together and may not be from the area. They are de­scribed as:

Here are some steps you can take to prot­ect your PIN on both debit and credit ca­rds: