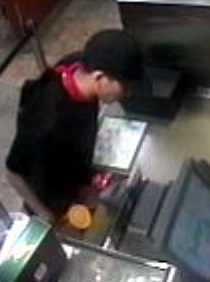 August 15, 2012, Elmsdale, Nova Scotia . . . RCMP are requesting assistance identifying a suspect involved in a robbery in Elmsdale.
On August 7th, 2012, at 12:32 a.m., Enfield RCMP were dispatched to a robbery at Tim Horton’s located at 267 Hwy 214 in Elmsdale.  Police were advised that the suspect stated he had a gun and demanded money.  The suspect was given an undisclosed amount of cash and fled.
The suspect is described as a white male, around 20-years-old, approximately 6′ feet tall, with noticeable facial acne. He was wearing a red bandana around his neck.
Police have gathered images and video footage of this individual and are sharing these in hopes the public may recognize him.  Photos and video footage can also be located on the Royal Canadian Mounted Police in Nova Scotia Facebook page at http://www.facebook.com/pages/Royal-Canadian-Mounted-Police-in-Nova-Scotia/206153899778 . For electronic copies of the video or pictures please contact Sgt. Brigdit Leger.
Anyone who can identify this individual or has information regarding this investigation are asked to please contact Enfield RCMP at (902) 883-7077.  If persons with information would like to remain anonymous, they can contact Crime Stoppers any time at 1-800-222-8477 (TIPS).  Calls to Crime Stoppers are not taped or traced and if police make an arrest and lay charges based on the tip, callers qualify for a cash award from $50 to $2000.  People can also submit secure tips online at www.crimestoppers.ca .
Source: Release