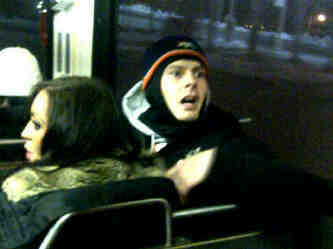 Halifax Regional Police is requesting the public’s assistance to identify the suspects responsible for a weapon offence on New Year’s Day in Dartmouth.
On January 1, 2013, at 1:36 a.m., officers responded to a weapons call that occurred on a Metro Transit bus travelling on Wyse Road. A man and woman were involved in a verbal altercation with four younger women when the man produced what was described as a handgun and pointed it at the heads of two of the victims. The suspects then exited the bus and left the area on foot. As they were leaving the bus, the female suspect punched one of the victims in the face. The victims were not injured and officers have yet to identify the suspects.
The male suspect is described as a white man in his twenties, 5’8”, with a slim build and wearing a black “ECKO UNLIMITED” jacket with orange writing on the back, white trim and a Denver Bronco’s blue tuque. The female suspect is described as a white woman in her twenties, with long black hair, and wearing a black coat and gray sweater.
Anyone with information on the identity of these suspects is asked to contact police at 490-5016. Anonymous tips can be sent to Crime Stoppers by calling toll-free 1-800-222-TIPS (8477), submitting a secure web tip at www.crimestoppers.ns.ca or texting a tip – Tip 202 + your message to 274637.
Source: Release
2013-02-25
Haligonia.ca