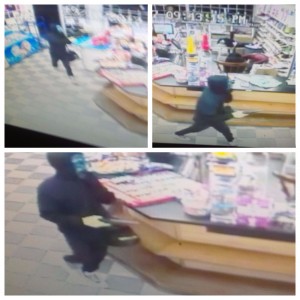 At 10:22 p.m. on October 19, police responded to a report of a robbery in progress at Showtime Video & Variety located at 32 Albro Lake Road in Dartmouth. A lone male had entered the store with a firearm and demanded the clerk give him cash from the till. The clerk yelled and the suspect fled the store while a customer chased him. The suspect was last observed running westbound from the Wyse Road to Albro Lake Road area. There were no physical injuries.

At 10:52 p.m., police responded to a report of another robbery in progress at Bridgeview Grocery located at 188 Bedford Highway in Halifax. A lone male entered a store with a firearm, pointed it at the clerk and demanded money. The clerk said no and the male fled the area on foot. There were no physical injuries.

At 11:33 p.m., police responded to a report of a hold-up alarm at the One Stop Shop located at 269 Windmill Road. Officers determined a male in a mask had been outside the store and attempted to gain entry by pulling on a door that had been locked by the clerk. The male was unsuccessful and fled the area. There were no physical injuries.

The suspect is described as a white male, approximately 6’ with a thin build. At the time of the incidents he was wearing all black clothing and a metallic blue mask.