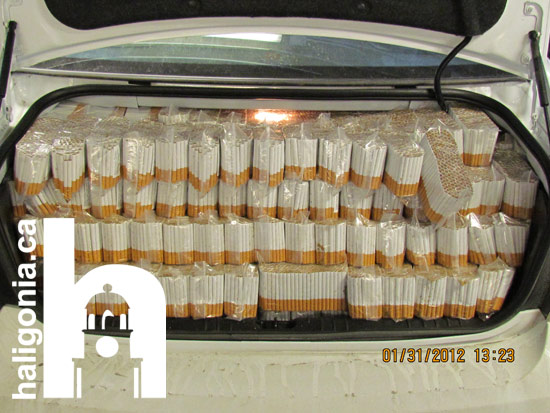 On Tuesday, January 31st at approximately noon, members of the RCMP Customs & Excise Section, in partnership with Service Nova Scotia and Municipal Relations conducted a search of a 2011 Chevrolet Impala in Fairview, Nova Scotia and seized approximately 135,000 contraband cigarettes.
The investigation revealed that a 35-year-old Timberlea woman was transporting illegal cigarettes from Quebec to Halifax Regional Municipality (HRM).
The illicit tobacco trade presents a serious and growing threat to public safety and health. “There are many misconceptions when it comes to illegal cigarettes and the harm they can cause,” says Sgt. Terry Barrett of the Nova Scotia Customs and Excise Unit. “These illegal cigarettes were destined for the streets of HRM and the people who purchase these products are funding illegal activity of criminal groups.”
A 35 year old female from the Timberlea area will appear in Halifax Provincial Court on April 25th, 2012 to face charges under the Excise Act and Revenue Act.
The investigation is ongoing.
It is an offence in Canada to possess tobacco products not properly stamped under the Excise Act, 2001. Offenders convicted of possessing, buying or selling contraband tobacco products could be subject to fines or penalties ranging from $10,000 to $1,000,000 and/or imprisonment for up to five years. This excludes Provincial fines, which can be many times higher. Anyone with information regarding the sale and manufacturing of contraband tobacco is asked to contact police or Crime Stoppers at 1-800-222-TIPS (8477).
Source: Release