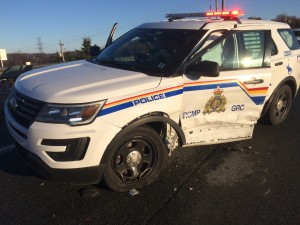 At 7:20 a.m. on April 7, a member of Halifax District RCMP was injured when his​ vehicle was struck by another vehicle. He was stopped at a collision, and​ the police vehicle was fully marked with​ the roof lights turned on.

The police officer was stopped to assist a driver at a single vehicle collision on Hwy. 102 near the Hwy. 118 interchange. A vehicle in the southbound lanes approaching the collision scene from behind lost control in the corner and collided with the rear driver’s side of the police vehicle. The RCMP officer​ was in his vehicle at the time.

The police officer sustained minor injuries and was transported to the local hospital. He was treated and later released. The driver of the vehicle that struck the police vehicle was assessed by EHS at the scene and was released at the scene.