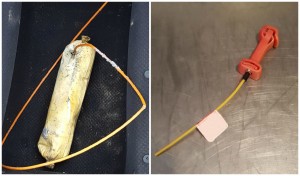 On July 6 at approximately 9:20 p.m., police attended Abbington Avenue regarding commercial explosives found on a construction site. The caller advised that he was walking with his children in the area of the construction site, and located an undetonated blasting cap and slurry (commercial explosive). Officers with the Explosive Disposal Unit attended and removed the two items that were taken to another site and safely detonated. Police returned to the area again today to do a visual inspection in the daylight and no further items were located. The Department of Labour and Advanced Education has been contacted to further investigate this matter.

Citizens are reminded to call 911 immediately if they come across what they believe to be commercial explosives.