The fall seems to be the time of year that charities wage their campaigns for funds. My favourite charity is the United Way; they spread their donations amongst a number of charities. This helps me feel a little less helpless when it comes to wanting to help “the world”. I know that the little bit of money I give is not going to solve everything but I do know that together “we can do it”. Reducing poverty is one of the charity issues that I care about and I have found that there are a lot of books out there that address this issue. 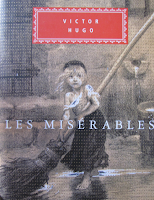 Les Miserables by Victor Hugo is considered by some to be the greatest novel of the nineteenth century. It is still popular today, especially the stage play. Known by its french title but it has been translated into The Wretched, The Poor Ones, The wretched Poor or The Victims. The novel takes place between the years 1815 to the 1832 June Rebellion. It is a fantastic study of human psychology with many plots and characters but focuses on Jean Valjean, an ex-convict and his struggle for redemption.
The size of the novel can be intimidating to some. It is divided into five volumes, each volume divided into books and then sub divided into chapters. There are 365 chapters but they are usually extremely short, usually no more than a few pages each. This ends up to exceeding 1400 pages and even longer in the original french language. It is considered one of the longest novels written. Despite this the novel was a great commercial success when published in 1862 and continues to be so in 2012. Some readers of the novel have stated “give me 100 pages and your life will change” and this is my challenge to you!

Charles Dickens has written some of the world’s most memorable fictional characters. Known as an English writer and social critic of the Victorian period, he was and still is hugely popular. I personally feel that the majority of Christmas movies produced are inspired from his Christmas Carol. My first introduction to Dickens was through a movie, Oliver Twist. From there I grew to love his writing. Dickens’ reason for writing about the poor in society may have come from his own family. They were imprisoned in Marshlands Debtors’ prison when he was 12. He later used the prison as a setting for his novel Little Dorrit. Dickens was forced to work at Warren’s Blacking Warehouse, earning 6 shillings a week pasting labels on pots. The working conditions can be seen in various novels Dickens wrote, including what is considered to be his most autobiographical novel David Cooperfield. While Dickens wrote many novels my favourite will always be Oliver Twist, maybe because this novel is the first Victorian novel to have a child protagonist. For those unfamiliar with this great novel it is about an orphan, Oliver Twist, who experiences a horrible childhood when his beloved mother dies. He is placed in a workhouse and then with an undertaker. He escapes to London where he meets the pickpocket, the Artful Dodger and his criminal trainer Fagan. This book lead me on a roller coaster of a read that I have never forgotten. I don’t believe you will either, Dear Reader!

Move forward in time and you have another famous author whose theme of poverty was a major influence in his books. Nobel Prize winner, John Steinbeck’s novels can be classified as social novels dealing with the economic woes of rural labourers. He wrote 27 books which include Of Mice and Men, Oprah’s favorite East of Eden and many more. His 1939 novel, the Pulitzer Prize winning The Grapes of Wrath, is still on my top five favorite novels. It brings to life the lives and struggles of poor farmers forced to leave their lives and farms during the Great Depression. The Joad Family were sharecroppers forced from their Oklahoma home due the dust storms in the Dust Bowl. They, like many others, flee to the land of opportunity, California, hoping to find jobs, land, dignity and a future. What they find on their travels is discouraging. Yet I love the quote :

So these are some classic novels on poverty that have been written many years ago. Unfortunately this is still a subject that is here in the present day. And to maybe misquote Jesus Christ Superstar “there will be poor always“. Here are some similar titles you may wish to read, both fiction and non-fiction:

Bastard Out of Carolina – Dorothy Allison