We officially have a two-year-old. Thankfully, we appear to be avoiding the “terrible two” stage so far. Our boy is generally quite pleasant and happy. He certainly knows how to throw a tantrum, and he understands when he is misbehaving, but these are “qualities” that we still see quite rarely.

One morning recently, Cameron woke up happily enough. In fact, after a late night for his Mama and an early morning for his Dad, Cameron was probably the peppiest of us all. There were smiles and snuggles and some of the cutest, wobbly, just-woke-up walking you could imagine.

I had just finished my bowl of Special K when my husband and son wandered into the kitchen. After saying “Hi Mama!”, Cameron pointed towards my bowl and squealed “Cereal!”.

“Which bowl would you like to use?” he asked, holding out a bright orange bowl beside a Disney Cars themed one.

“And, is this the cereal you want?” Dan held out the Honey Nut Cheerios. After a short addiction to Fruit Loops, we compromised somewhere in the middle of the Healthy — Death-by-sugar continuum by encouraging Honey Nut Cheerios, mixed covertly with regular Cheerios.

“Yeah!” My son was excited for breakfast. He ran to his “eating chair”. I was reflecting on how such simple joy could start the morning off right and spread so much warmth in a family even before the sun had risen. Dan was plopping Cameron into his high chair and handing him his bowl of cereal.

Cam pushed his cereal away. His little face started transforming into and big, wrinkly, cry-face. 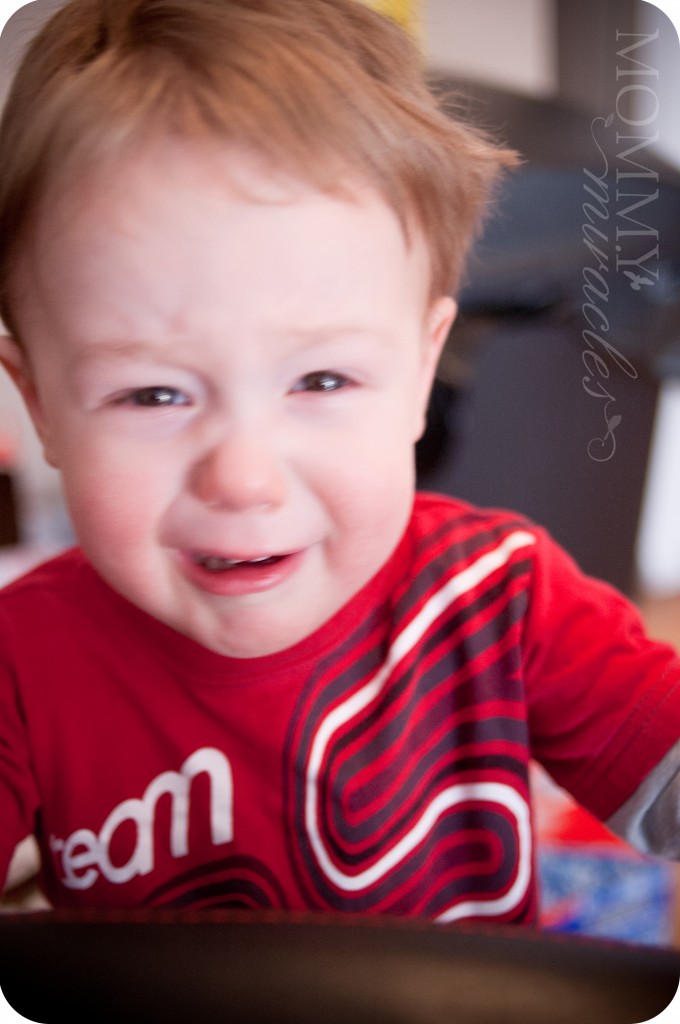 “What’s wrong Cameron? Use your words. Tell us what you want. Don’t just start crying. We don’t know what that means!” We couldn’t understand what had happened. Cameron chose his cereal. He chose his bowl. Did he want a different spoon? No. A drink? No. He kept pointing towards the kitchen. So we picked him up and walked him in the direction of his outstretched finger.

“Do you want a different kind of cereal? You wanted Honey Nut Cheerios! Would you like this one instead? This one? No? This one?”

And that was it. My precious little bundle of light had collapsed on the floor, face down, wailing. His stiff body just radiated anger. He threw his cup on the ground. He sat up and collapsed again. He ripped things from our hands. He stared us down and cried and screamed and cried some more.

Why couldn’t we understand?

My husband and I sat nearby, wanting to show Cameron that we would be there when he came around but not wanting to give into his little charade.

Language is a funny thing, isn’t it? Here is my little boy, making Mommy and Daddy so proud by learning to talk, completely opening up new worlds of communication that we can share with him, and somehow, closing himself off to other forms of communication. I am convinced that tantrums begin around the same time as language development because our children, who are learning to express themselves in a new way, are not quite able to express themselves fully yet.

Before he could talk, before he was mobile and could do things for himself, I anticipated my son’s every need. I only rarely found myself frustrated while trying to meet his demands. Somehow our bond and our routine made it possible for me to know him. I knew his needs. I fulfilled his needs. I anticipated his needs.

And now, as our communication has moved into this beautiful and uncertain world of language, we are losing the ability to decipher each and every thing this little boy tries to express. The frustration is palpable, sometimes on both sides. Language, in its simplest form, fails to meet every need that the human heart requires. As much as these tantrums drive me nuts, it also breaks my heart to watch this breakdown of communication between my son and I.

Each day, my son’s vocabulary grows. Our ability to communicate verbally increases. And yet, I am pretty certain we will continue to have these breakdowns of communication. In fact, I am sure they will continue for the rest of our lives. Tantrums might take on different forms as my son grows up, but they will still be present, as they are in all of our lives. Language will never be perfect to express our heart.