The background map images used by MTransit.ca were updated by Google a week or so back to include Metro Transit’s new bus icons. These icons are shown when zooming into the map. Unfortunately, there are a number of problems with these new icons.

The new Google Maps bus icons were displayed along with the our MTransit.ca bus stop icons, resulting in blue bus icons from Google, and circles from us. This is quite confusing. But more important, we have found that our bus stop circle locations appear to be much better than the bus icons on the new Google Maps images. The Google Maps images are based on data provided to Google Transit from Halifax Metro Transit.
The Google Maps stop locations in many parts of HRM, seem to be pretty good. However other locations are just wrong. Google Maps (and Google Transit) bus stop locations are often on the wrong side of the road, in an intersection, at some distance from true location, or do not exist.
The example below is a screen capture from MTransit.ca (before our patch). It is downtown Halifax, near Barrington and Cornwallis. Google Maps bus stops are the blue bus icons. Our bus stops are the circles. The blue lines are our bus routes. It is easy to see that the blue icons have incorrect locations. Also Provo Wallis St is actually shifted to the right a bit, compared to Google’s satellite image. 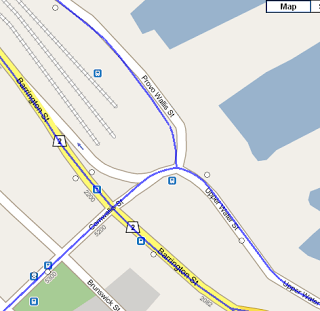 The problem is likely that many of Halifax Metro Transit bus stop locations are quite old (e.g. before GPS), or may have moved over time. On the other hand, the unofficial MTransit.ca stop locations were all recorded by GPS this past winter.
Unfortunately the Google bus stop icons cannot be disabled from the background images that we have been using in our trip planner (We’ve asked Google support). So we had no choice, but to prevent our users from zooming in to the point where the Google Maps bus images were displayed.
Links