Meet Joe Gunther (M), the lead character in Archer Mayor’s long running police procedural mystery series. The first title in the series is Open Season (M), published way back in 1988. Tag Man (M) published in 2011 is book number twenty-two. (Please note that Open Season is currently available as a free e-book download on the author’s website).
Joe began the series as a police lieutenant and has worked his way up to being the head the Vermont Bureau of Investigation. His skills and aptitude have made him the go-to guy when the crimes get messy, both intellectually and physically- forensics are often integrated into the plot lines. He has a sharp mind and a dogged pursuit of justice. He is calm in the face of adversity and trusts his gut feelings to guide him in times of crisis. 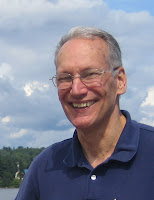 Joe is a widower and a veteran of the Korean War. He stumbled into police work after the war, giving him a new direction in life. His dedication to police work has made it difficult to have a sustained relationship, but Joe has tried his best, first with Gayle and then with Lyn. As the series has progressed, readers have also got to know many of the other secondary characters, such as Detective Willy Kunkel.

Author Archer Mayor, who is also a published historian, likes to inject history into his novels. Archer is also quite astute in describing settings within Vermont, as well as accurately describing the procedural aspects of police work, which give the novels a strong sense of realism. The tone of the series is atmospheric and suspenseful. Mayor has placed numerous titles in the major best sellers lists and has been described by the New York Times as “one of the most sophisticated stylists in the genre“.
“Richly drawn characters and a delightful sense of place are hallmarks of Mayor’s superb procedurals, and they are both in evidence in this fine addition [Tag Man] to the series” – Booklist
“Mayor is not given to gimmicks and manipulation. There are flashier writers, but few deliver such well-rounded novels of such consistent high quality.” -Arizona Daily Star
“As a stylist, Mayor is one of those meticulous construction workers who are fascinated by the way things function. He’s the boss man on procedures.” -New York Times