Meet Santa Claus, Saint Nicholas, Kris Kringle – man of mystery. As you sit by the glow of your laptop, enjoying your eggnog, tracking Santa’s progress via Norad or Google Earth have you ever wondered about the origin of this industrious and generous man? Some say gifted woodworker, others say holy man and others believe he wandered into the forest and was discovered by elves. Curiously, some writers below had the unique experience of hearing Santa’s story from the big guy himself.
The Christmas Chronicles: the legend of Santa Claus (M)
by Tim Slover

“Snow is falling, and the clock ticks toward midnight on Christmas Eve while countless children, too excited to sleep, anticipate the arrival of Santa Claus. But in Tim Slover’s deeply charming and utterly thrilling new novel, that’s the end rather than the beginning of the story. It all starts in 1343, when the child Klaus is orphaned and adopted by a craftsmen’s guild. The boy will grow to become a master woodworker with an infectious laugh and an unparalleled gift for making toys. His talent and generosity uniquely equip him to bestow hundreds of gifts on children at Christmas.” publisher
The Autobiography of Santa Claus (M)
as told to Jeff Guinn

“In “The Autobiography of Santa Claus”, Santa reveals his story for the first time. Nicholas (his real name) was born in the Middle Eastern country of Lycia to wealthy parents who died when he was young. The kind people of Lycia taught him the lessons of goodness and generosity, which he began to practice as a child by sharing his wealth with those in need. As a young man, Nicholas realised that this generosity had bestowed upon him special abilities to distribute his presents to deserving children everywhere. And so it was that Santa broadened his gift-giving and spread his message to many others who also valued his belief in the goodness of giving. ” publisher
Nicholas: the epic journey from saint to Santa Claus (M)
by Jeremy Seal

“Nicholas is a biographical travelogue tracing the evolution of one of the greatest cults of modern times—the rise of Santa Claus from his origins in Byzantine Turkey to his role as the jolly man who grants every child’s wish. It is a compelling story of religious worship and strife, cultural interpretation, and mass commercialization brilliantly framed by Jeremy Seal’s modern-day voyage in Santa’s footsteps. Saint Nicholas, as Santa was originally known, lived and worked in Myra on the southern coast of Turkey 1,700 years ago. He became a revered figure in the Orthodox and Catholic churches, attracting devotees across the Christian world as his cult shifted westward with the centuries. The saint’s bones are said to still exist, and Seal’s dogged pursuit of these relics launches his quest for Santa’s true lineage—one that takes him through present-day Turkey, Italy, Holland, England, America, and finally Lapland as he pieces together the history of this extraordinary man-to-myth transformation.” publisher
Santa Claus: a biography (M)
by Gerry Bowler

“Offering the definitive chronology of hope and imagination, Bowler follows the Santa myth from its origins to the jolly man’s appearance on the big screen. The lore of St. Nicholas, bishop of Myra and patron saint of maidens, fruitful marriages, students and children, has morphed with the various cultures that have adopted him as a symbol of Christmas spirit: he has inspired both charity and greed, and has been known to answer to generals during wartime. Bowler demonstrates how Santa Claus has flourished with the help of imaginative writers and artists and has endured despite the forces of advertising, politics and Hollywood. ” publisher
Santa: my life and times: an illustrated autobiography (M)
created and produced by Martin I. Green 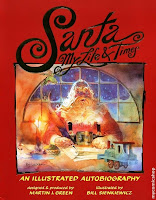 “The man, the myth, the legend: Santa Claus. The story behind Santa Claus has always obscured the truth about the real man who lies behind the beard. This is his revealing story, presented for the first time: from his early teenage years when he walked into a forest and was discovered by elves, to his first moments with the future Mrs. Claus, to today — when Santa brings his message of hope, joy and love to the lives of people around the world.” publisher