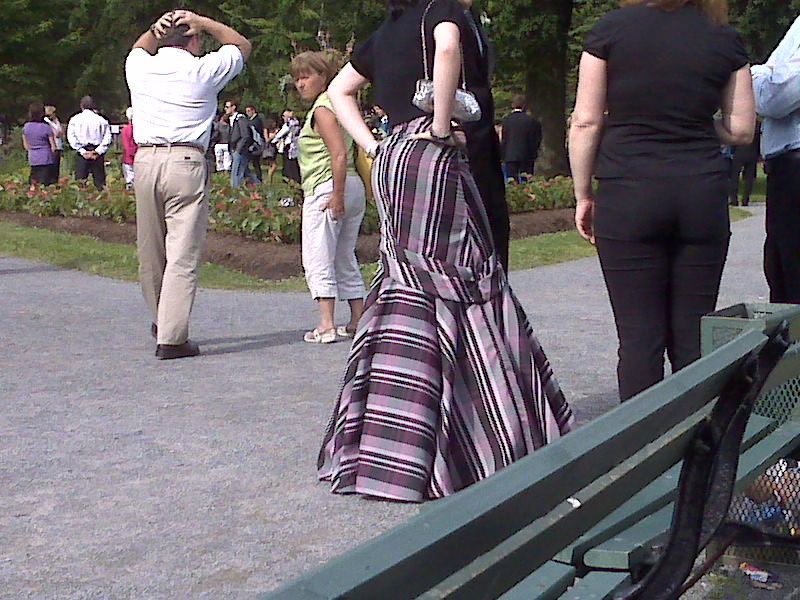 L-A: Prom season in Halifax is over and now I”m going to have to find something else to do with my evenings after work. For those of you who missed it, I highly recommend hitting the Public Gardens (or whatever prom photo hot spot exists in your city) next year, because it is a source of endless amusement. There were head tilts and golf claps and some “oh honey, no” moments. Intern Krista and I enjoyed the festivities on three different evenings and were joined by Jill, Anthony and two of Krista’s friends from her own prom days (Trish and Janet) for Saturday’s field trip.  I wish we had pictures of all the best and worst moments, but we felt a little bit creepy being the only grown ups with cameras, but weren’t with a prom-goer.  We did collect a few highlights for you.

Number of Back tattoos that seem like a good idea when you’re 16: 5-10/night

Number of tiaras: surprisingly few! Only 2-3 over the entire week. Krista wonders if this is a lack of optimism on the part of teenage girls – because it requires a certain kind of optimism to dress like a princess.

Number of hanging straps visible: 5/night (at least). Cut them off, please.

Number of teenage smokers with the guts to smoke in front of parents: we lost count.

Number of 1940s themed looks: 2 (one with adorable finger curls!)

Number of girls having trouble walking in their heels at 5:30pm (before the prom actually got started): too many to count. If you aren’t used to heels, you need to practice. If you can’t do that and you can’t walk, the whole look is ruined.

And now for some awards…

Best use of plaid at a prom:

There was a dude in a kilt, but that was not quite as awesome as a plaid gown.

The “She didn’t get that dress in Halifax” award goes to the girl who also carried a Chanel bag:

It was determined that she was carrying real Chanel because if it were fake, it would be more “Channel-ly”. You don’t bring a subtle Chanel knock off to your prom. You’re either bringing the real thing to impress, or you go with another bag. At least, this is the theory from the peanut gallery. Her dress was cute and early days Jenny Humphrey (before the bad extensions and the Courtney Love outfits) – the skirt was floufy and the kind of short that only a girl under 25 with great legs can get away with. The top was sequins with a ruffled collar.

There were a number of runners up in this category, not mentioned here because we didn’t get photos of them. One of these runners up was a Thursday evening favourite of a salmon coloured, strapless, Grecain number with chiffony strips. This particular dress could have won Best Overall Dress except there was too much futzing with the bodice or grabbing at the skirt and that ruined the overall look. She had great hair though.

The, “if your date has to help carry your dress, you’re going to have a bitch of a time dancing tonight” award:

An award for Most Confusing Dress goes to one without a picture, but three girls on three different nights wore it. The skirt was long and was a mix of bright florals with leopard print and the bodice was a gold lamé.  We were confused by what the dress was trying to be and we were confused that at least three different girls at three different schools chose this same dress. Baffling. Points go to the girls for trying something different though.

Speaking of patterns, we’d like to give the entire prom season a thumbs up for girls who tried something different with prints. It didn’t always work, but you tried and we liked that. One of the Favourite Prints of the Season goes to this dress:

A dress that started as a head tilt, but ended with golf claps, possibly because it fit her so damn well, goes to the following:

It probably weighed a tonne, but it was long, with a kicky bit in the back and she looked great.

I’m going to finish off part one with some favourite #promservation tweets and the Lookalike Award.  We’ll add a few more pics later, as well as the announcement about The Prom Committee – which is our big plan that is just waiting for the website to work.