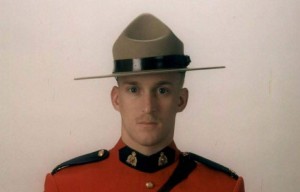 The public is invited to join the family of Constable Francis Deschênes and the law enforcement community as they celebrate his service and mourn his death during an RCMP Regimental Funeral, on Wednesday, September 20.

The funeral service will take place at St. Bernard’s Catholic Church located at 43 Botsford Street, Moncton at 2 p.m. There will be a procession of uniformed law enforcement starting at approximately 1p.m. on Assomption Blvd., marching to the church. Road closures will be in effect beginning at approximately 10 a.m. Details are below. Funeral services will begin at 2 p.m.

The public is encouraged to gather along the parade route to show their support for Constable Deschênes’ family and can view the service at St John’s United Church at 75 Alma St. The public is asked to be seated at this venue by 1:45 p.m. There is limited seating. The RCMP thanks the public for their patience and cooperation in regards to these arrangements.

Funeral services will also be available to be viewed online http://av-canada.gowebcasting.com/8392.

The Nova Scotia RCMP would like to express our appreciation for the amount of support, kind gestures, thoughtful notes and emails. We have listened to and read messages of appreciation and words of shared grief from the public, law enforcement and emergency service provider partners form around the world as well as municipal partners and local businesses. We are humbled by such an outpouring of support.

The procession of RCMP, police, military and emergency services personnel will march eastward along Assomption Boulevard., turn left on Downing Street, and cross Main St. onto Botsford Street towards St. Bernard’s Church. The procession will be in advance of the Regimental Funeral of Cst. Francis Deschênes.

Motorists can expect delays and detours in downtown Moncton starting at 10 a.m. when the eastbound lane of Assomption Blvd. will be closed to traffic from Euston Street to Downing Street. The westbound lane will remain open to traffic with a brief interruption when the procession turns onto Downing St.The street closure and detour is expected to remain in place until approximately 2 p.m.Motorists are being asked to respect the barricades and traffic cones set up for the road closures.

Motorists can also expect road closures and delays along Queen, Alma, and Church Streets as a portion of the funeral procession proceeds to the two overflow locations, First United Baptist Church at 157 Queen St. and St. John’s United Church at 75 Alma St.

The road closures are for the safety of the first responders marching and those attending funeral and the overflow locations.

The RCMP wishes to thank the City of Moncton, its residents, businesses and travelling public for their support and cooperation as we gather to remember Cst. Deschênes.

Please continue to use the email address below to leave your thoughts and prayers for the family of Cst. Francis Deschêsnes.RCMP.Condolences-Condoleances.GRC@rcmp-grc.gc.ca