The internet has been flooded with pumpkin-themed recipes as of late, whether to use up leftover pumpkin from Canadian Thanksgiving, in preparation for American Thanksgiving, to welcome autumn, or in anticipation of Halloween. Whatever the reason, I have welcomed this flood with open arms and an open mind.

I’ve had an oversized can of pumpkin in my cupboard for weeks. I had intended to use it over Thanksgiving a few weeks back, but when that fine pumpkin pie swung into town courtesy of my mother, my tin of pumpkin got pushed to the back of the pantry.

Hidden it may have been, but certainly not forgotten. I eyed that can, day after day, foraging for lunch to take to work and imagining all it would become. I saved, printed, and scoured recipes every day, wondering what manifestation this can of goodness would take. Not that I couldn’t just run out and buy a few more cans and experiment with other recipes – and still could – but this can of pumpkin was meant for greatness.

Or, maybe not. But it sounds nice, right?

While the internet was dealing with this flood, I found the recipe I was after in a heavy-in-your-hands, pages-you-can-touch, bona fide cookbook that I’m becoming slightly obsessed with. Around My French Table (by Dorie Greenspan) is becoming my kitchen mainstay, my go-to reference whenever I want to make something with panache or a heretofore unattempted flair. For this home cook, it’s becoming a staple. I’ve tried over a dozen recipes in it so far, all of which have met with success, and all have stretched and challenged me. I’m going to be cooking out of it for years to come.

This cookbook is quite celebrated, so I’m certainly not alone. There are online blogging events called French Fridays With Dorie and Tuesdays With Dorie whereby members of each respective group blogs about their attempts at previously agreed-upon recipes, on those days of the week. It’s something I’ve been itching to join for months now, but having only received the cookbook for my birthday in September, the timing just hasn’t worked out for me to join in on their selected recipes. Yet. I’ve forged ahead on my own anyway, testing as many recipes as I can find time for. With everything else I’ve gotten my apron strings tangled up in lately, it’s probably for the best. This way I still have time to write about other things happening in my kitchen.

Speaking of stretching and challenging, and as a sidenote, I’m reading up a lot on food photography these days and trying to absorb as much as I can. With the resources I have, I want to learn how to take they very best pictures my camera and my eye are capable of. As a result, I’ve been toying with the settings quite a bit, in an effort to teach myself by trial and error, so bare with me (and my photos) while I go through this learning process. The lighting (among other things) will inevitably be off in some, but since a girl has to eat her dinner at some point, I’m going to work with what photos I manage to get before my food is icy cold. And, because I’m a visual learner, only reading about camera settings is proving to be a challenge. So, head-first I go into trial and error.

Last weekend I pulled together an entire menu from Around My French Table – Lyonnaise Garlic & Herb Cheese, Savoury Cheese & Chive Bread, Chicken B’stilla, and Gâteau Basque – getting the chance to finally treat friends Jenny and Sean who drove in from the Valley to spend an evening with us. Tonight, I got to use several of the gorgeous eggs Jenny brought me from her coop (yep, I’ve mentioned this coop before), to make my pumpkin recipe come to fruition.

For those of you looking for different ways of using up that pumpkin, or just getting as much of it as you can – ’tis the season – give Dorie’s Pumpkin Flans a try. Originally called Pumkin-Gorgonzola Flans, I made a couple of changes to suit my tastes. Namely, I used Chèvre (or goat’s cheese) instead of Gorgonzola, because I really love the distinct flavour that goat’s milk and goat’s cheese can put on dishes, so I thought it would make for a great, equally crumbly substitute.

I added some cinnamon and ground cloves to the mixture, too, so as to give a more autumnal feel, and cut out the salt called for in the recipe. 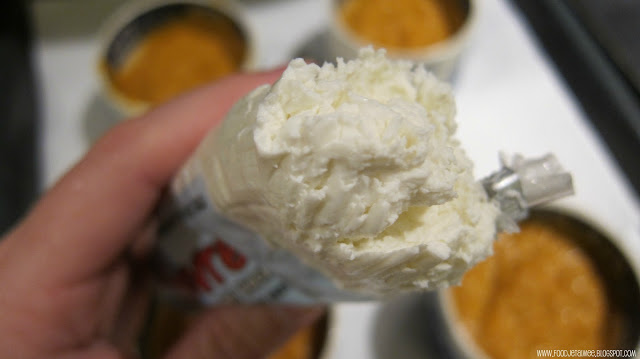 In respecting the tradition of the Fridays and Tuesdays with Dorie events (even though I’m not posting this as part of either event, nor is this a cookbook review of any sort), I won’t post Dorie’s recipe here. She hasn’t posted it on her blog, as  was the case with her honey spiced madeleines I made back in September, so since I can’t link directly to it, I’ll just encourage you to buy a copy of the book instead. If you want to see my version of the recipe, write to me and I’ll send it to you, but I do highly recommend the investment. It’s an absolute treasure.