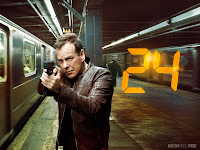 Fox TV’s hour-by-hour action show “24” is about to launch its 8th season. The premise of “24” is pretty simple – terrorists threaten America and government agents must save America from the threat …. all in 24 hours. While overall the concept is simple, seasons play out through a series of complicated plot twists, double-crosses, technological wonders, chases, and outlandish episode climaxes. But more than anything, “24” is known for its main protagonist Agent Jack Bauer. Bauer is a man dedicated to his job and his country, who goes to almost any length to make sure that his vision of justice is served. The runaway success of the show can be largely placed on the popularity of its lead character, portrayed by Canadian actor Keifer Sutherland.

If you’re a fan of the TV series “24” you may also enjoy some of these books, each of which are page turning action stories of terrorism, corruption, espionage and more. However, like “24”, it’s the main characters in these stories that will really draw you in and leave you awaiting their next exciting adventure.

Pursuit of Honor by Vince Flynn is the latest in Flynn’s series of books which feature Mitch Rapp a CIA trained operative in a highly secretive agency called The Onion Team. In the aftermath of a terrorist attack on Washington, Rapp and his colleagues are questioned on the tactics they used to bring the situation under control, while at the same time still trying to find some of the perpetrators that remain at large. The jacket description of this book could easily be a plot summary of a “24” season: Rapp proves himself to be a hero unafraid “to walk the fine line between the moral high ground and violence” (The Salt Lake Tribune) for our country’s safety, for the sake of freedom, for the pursuit of honour”

Fans of the sometimes questionable ethics of Jack Bauer’s interrogation and pursuit tactics may find something to enjoy in Kyle Mills‘ series of political thriller’s featuring rogue FBI agent Mark Beamon. The series began in 1997 with Rising Phoenix, which the library catalogue begins by describing in this way: “Special Agent Mark Beamon is a maverick. His open disdain for the FBI’s rules – and Directors – has exiled him to a no-profile post in the boondocks. But when a shadowy right-wing group starts flooding America’s emergency rooms with dead and dying, Beamon is summoned back to Washington…”

Secret Service Agent Scot Harvath chases down terrorists in yet another series by American author Brad Thor. Publishers Weekly said of Harvath in Lions of Lucerne the first book of the series “He’s fearless. He’s tireless. If you get him angry… he’ll pop you with an uppercut” and of the second in the series (Path of the Assassin) the same magazine proclaimed “had any more testosterone, it would grow hair.” Jack Bauer would be proud. 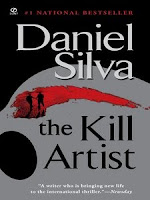 Finally, a series that’s a favourite with one of my co-workers, which features Gabriel Allon an Israeli spy who masquerades by day as an art restorer. Don’t let the art connection make you feel like this character is too tapped into his softer side, Allon is as tough as he needs to be. Author Daniel Silva‘s website shares this quote from USA today at the top of the page on the series: “Allon is Israel’s Jack Bauer. In true Bauer fashion, shootouts, kidnappings and international terror plots follow him wherever he goes.” The first in the series is The Kill Artist.