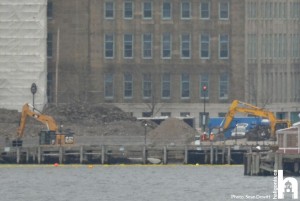 Development of the Queen’s Marque District is now underway on the Halifax waterfront. This mixed-use commercial, retail and residential development includes 75,000 square feet of public space and three new wharfs.

Waterfront Development and The Armour Group Limited unveiled plans for the Queen’s Marque District in May. It represents almost $200 million in private-sector investment in the waterfront and will take approximately three years. 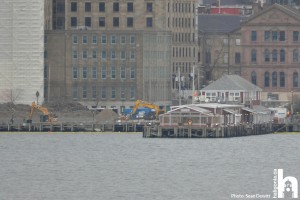 The province has approved additional capital funding of $1.8 million to support site preparation and remediation, enhanced public spaces, and build a new temporary floating boardwalk. The total approved investment is $6.5 million; $4.75 million was originally approved in 2010.

“This public investment will leverage almost $200 million in private-sector investment enhancing the value and appeal of an important public place and a key tourism asset – the Halifax waterfront – for residents and visitors,” said Jennifer Angel, acting president and CEO, Waterfront Development.

Located in the heart of the waterfront district, the site covers almost five acres. Known historically as Queen’s Landing, the area is steeped in rich military, marine, and mercantile history. This new destination will tell the story of Nova Scotia with designs speaking to the province’s shipbuilding past, present and future. Enhanced waterfront experiences for residents and visitors include a central public plaza, passageways, and an art installation.

“Queen’s Marque is a deeply local project,” said Scott McCrea, CEO of The Armour Group Limited. “To create something born of this place, it is essential to draw on local talent and knowledge. The architects, consultants and builders wherever possible will be local to this region.

“The idea of what it means to be Nova Scotian today will be expressed through local materials and goods to establish a sense of place and resonate with those within the region.”

During construction Waterfront Development and The Armour Group Limited are committed to minimizing impacts on neighbouring businesses and on the boardwalk experience.

The construction of an accessible, temporary, floating boardwalk will help minimize disruption. It will provide a pedestrian route on the water side of the Queen’s Marque site and be open whenever possible during the construction period. Upon completion, the floats used to support the boardwalk will be reused on the Halifax and Dartmouth waterfronts.

Construction plans also include directional signs around the site and a temporary sidewalk on Lower Water Street between Prince and George Streets. Nearby businesses, including Murphy’s the Cable Wharf, NovaScotian Crystal, and Maritime Museum of the Atlantic, will remain open through construction.

The former Queen’s Landing vendor area will move to a new home this spring, located between Sackville and Salter streets. Visit my-waterfront.ca.