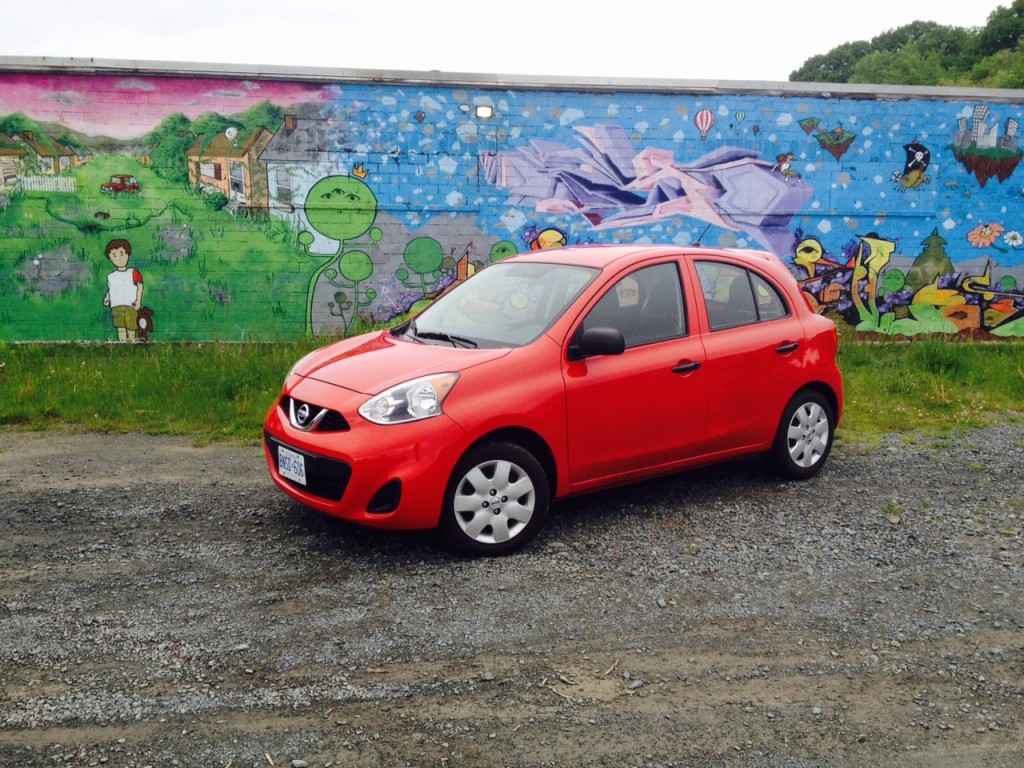 I’ve been fortunate enough to travel to all sorts of different countries. When I travel, I find it best to steer clear of resorts and really get into the weeds of the culture.

While doing so you get to experience of what every day life is for people all over the world.

This means that I’ve witnessed incredible people, cultures, food and scenery. Unfortunately that means I’ve witnessed indescribably amounts of poverty. However one thing I’ve consistently noticed is the people living in these poor towns and villages are usually quite happy.

Why is that? Well, would you believe that it took just a few days in the cheapest new car in Canada to help me realize why?

The Micra makes is Canadian return since the old Micra was last sold here back in 1991. And Nissan is smart to bring it back. 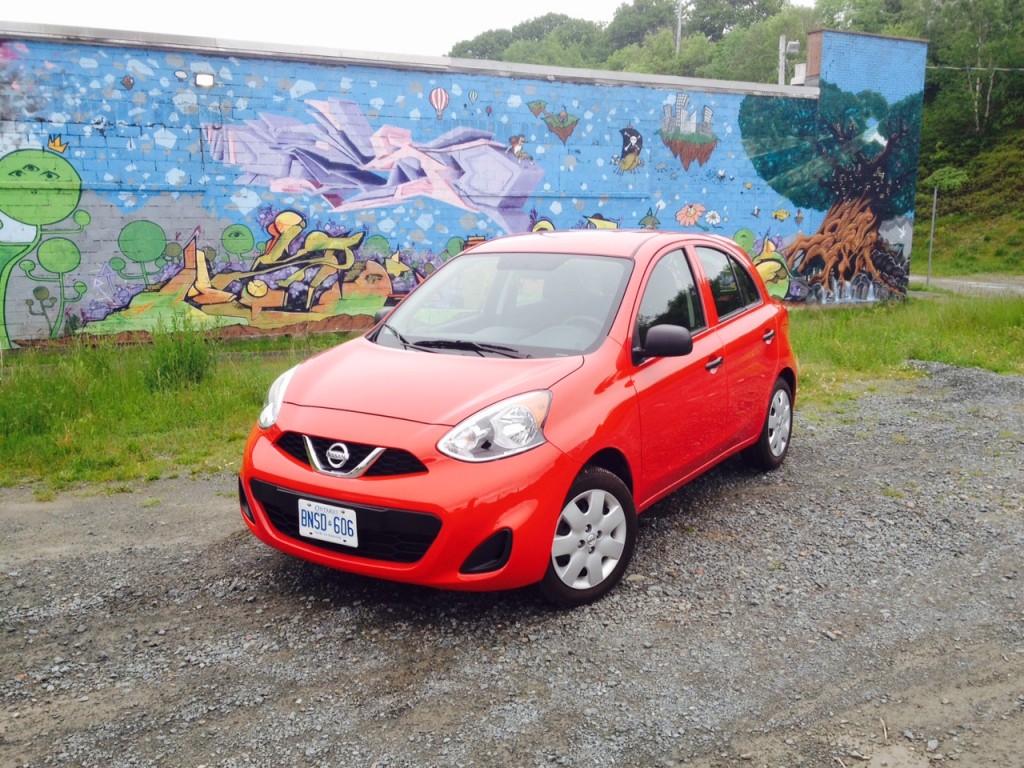 Firstly, it actually looks pretty decent for a car that’s a twoony shy of ten grand. The font fascia is decidedly handsome and takes  a more classy look than a look-how-cute-I-am look. The black door handles actually work well with the red paint and the wheels are 15-inches with hubcaps that look mundane, however they’re still larger wheels than a lot of other markets in the world get. That’s because Nissan wanted to make sure that there would be a good selection of winter tires that would fit. And that’s not the only feature Nissan has added just for us Canucks. We also get rear ventilation, a sway bar for better handling, available heated seats and 60/40 rear seats to fit our stereotypical hockey bags. 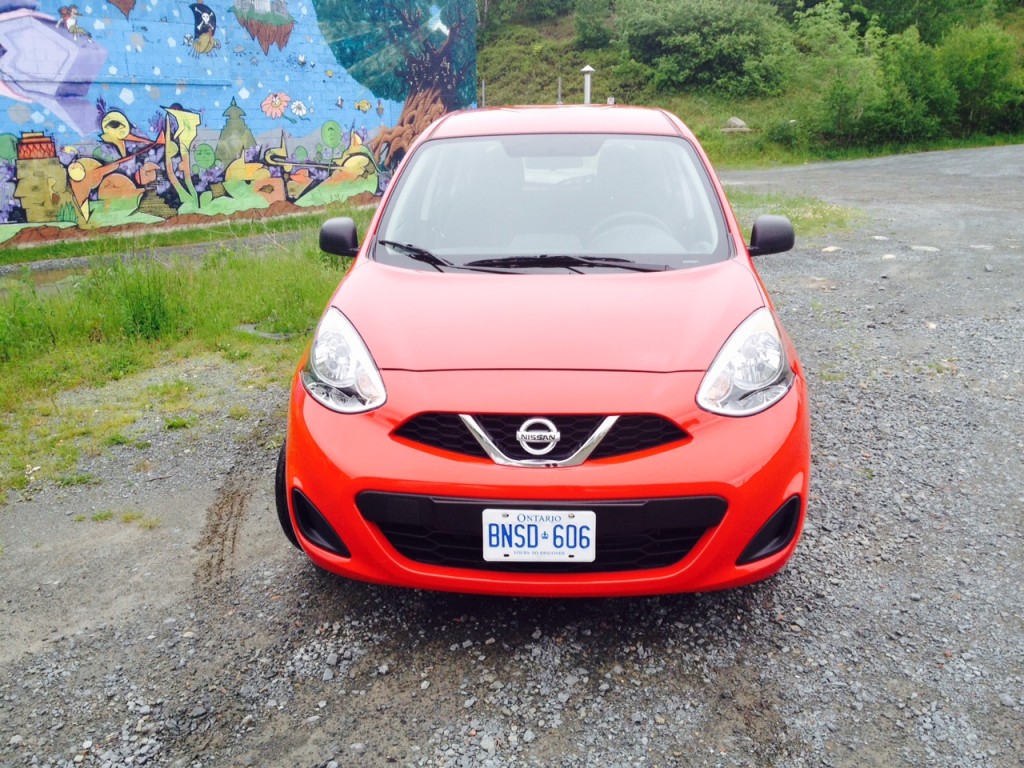 We also get a more powerful engines than our fellow humans overseas. Specifically it’s a 1.8 litre 4-cylinder which is good for 109 horsepower and 107 pound foot torque mated to my tester’s five-speed manual. Those may not seem like impressive numbers, but keep in mind the Micra is small and relatively light in weight. The end result? A car with a personality that can’t help but shine. 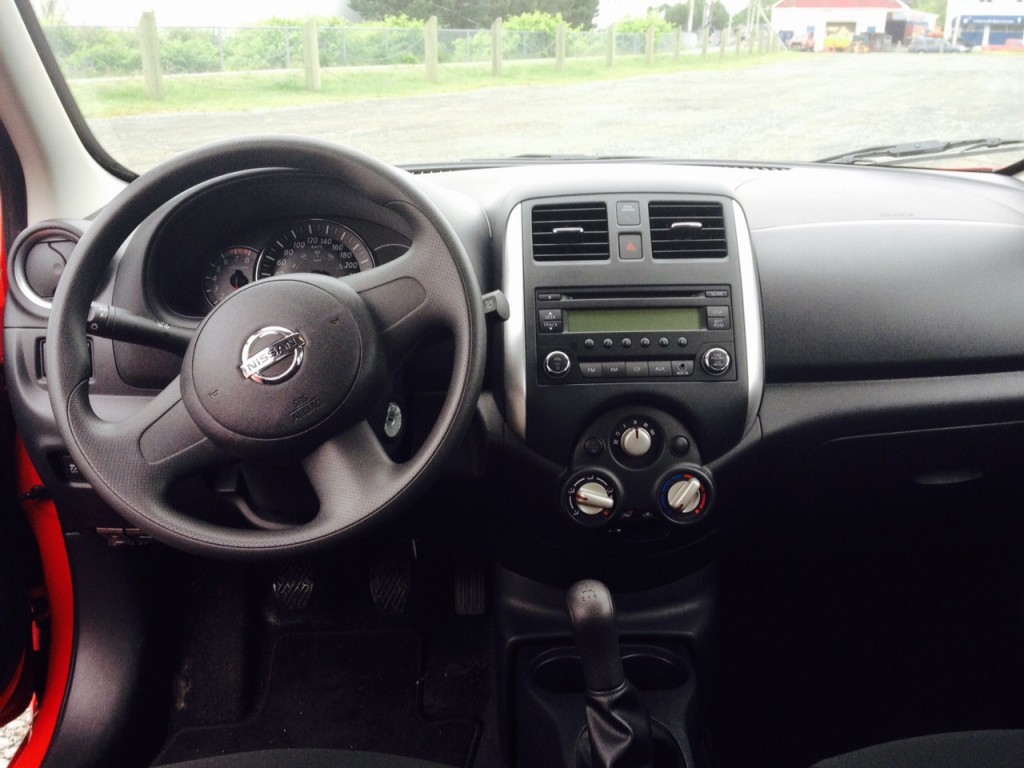 It’s zippy ability to get off the line with gusto is a real treat. It’s not so much that it’s fast, because it isn’t, it’s just the way it goes about doing it with an engine whine that is more reminiscent of a supercharged engine as opposed to an irritating spouse. It’s also the surprisingly decent shifting manual transmission. It is by no means a Hurst shifter, but shifts aren’t as clunky or as long as you’d expect, however the actual shifting of the gear is rather loud from cog to cog. It’s also its tossability, and its grace when it’s unable to take a sharp corner. Rather than groaning understeer, you get content moderate tire squeal.

While the interior is rather spartan, as with most small Nissans these days you to get value in terms of interior space especially in regards to head room. 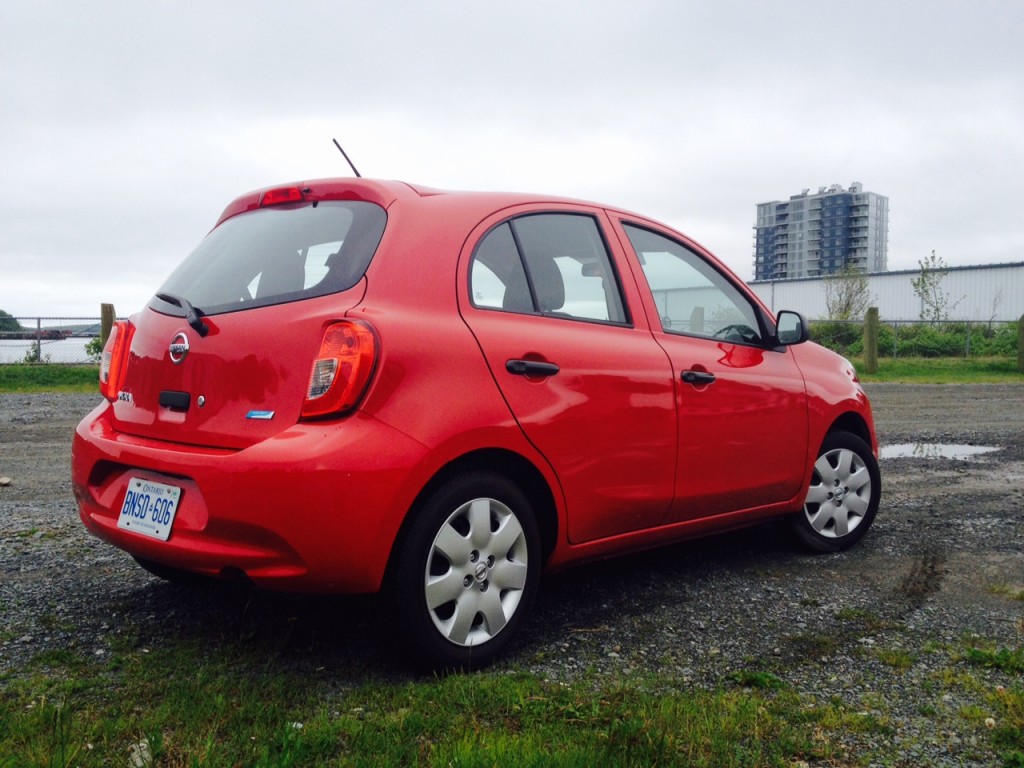 And that sort of goes back to my first point. While you can get a lot more great features on higher trim level Micras, the base Micra S is essentially the poor kid within the new car market. The reason why Nissan is able to price the S trim level of the Micra so cheaply is because it essentially has nothing: no power locks, no power mirrors, no power windows. There’s also no air conditioning, which admittedly could be an issue at summer time. There’s no buttons on the steering wheel, there’s no leather, there’s no high quality stereo system or XM radio or sunroof. There’s no automatic headlights, or back-up camera or blue tooth. 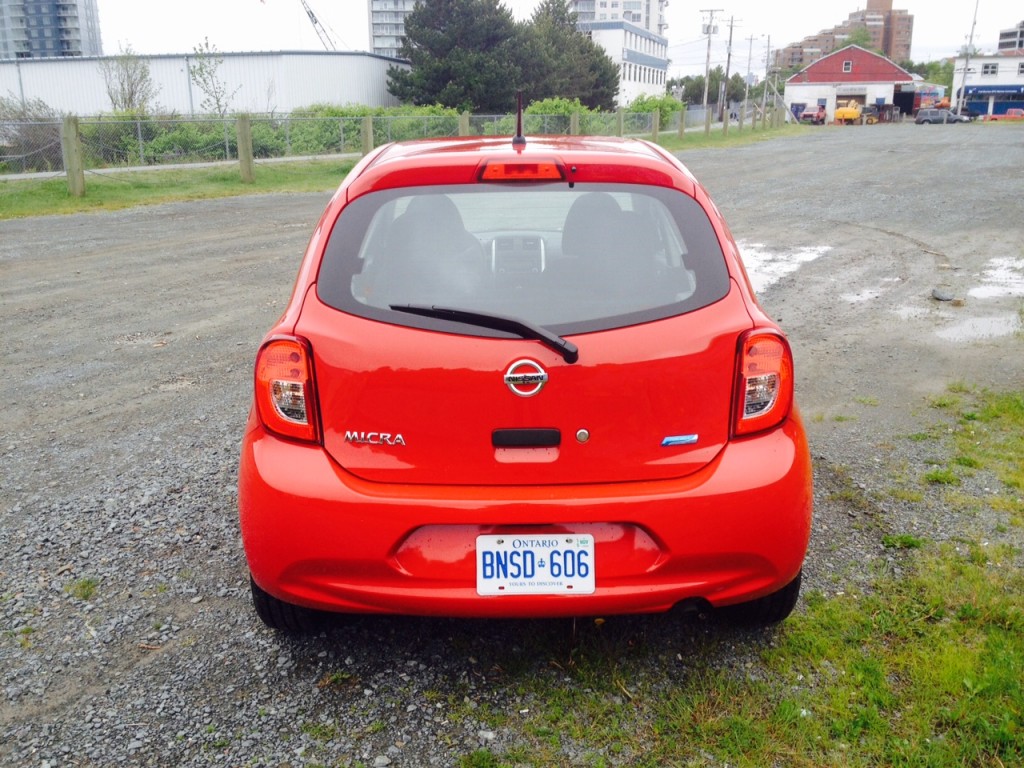 Yet, as a have-not car, it’s as happy as a clam. And as a result, so was I. It was so incredibly refreshing to drive a car that was, for all intents and purposes, completely raw. I drive a new vehicle each week and I loved that the Micra didn’t try to do anything for me, didn’t try to anticipate my moves behind the wheel and didn’t flash or beep at me whenever I did anything. It just did what it could do with what it had to the best of its ability. 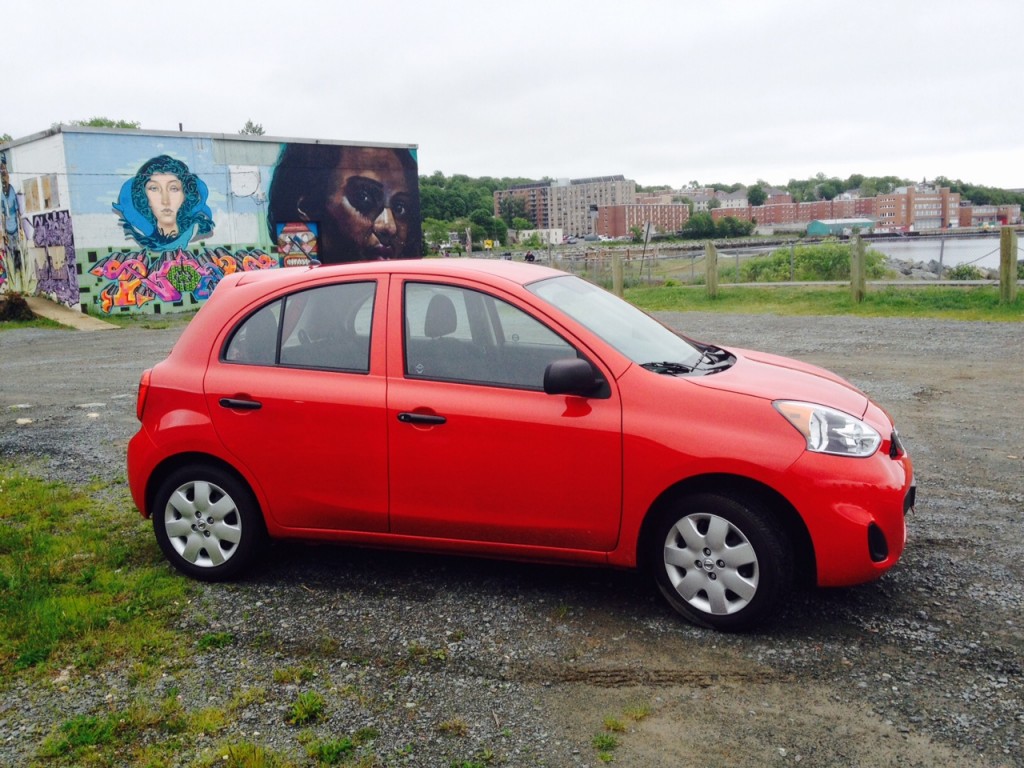 And that’s how I now understand why the people living in poverty in certain countries are so happy. They don’t need much in order to be happy which helps them to appreciate and cherish life to the fullest.

And it’s exactly what made me very much appreciate the Micra. my only regret is not being able to spend more time with it. 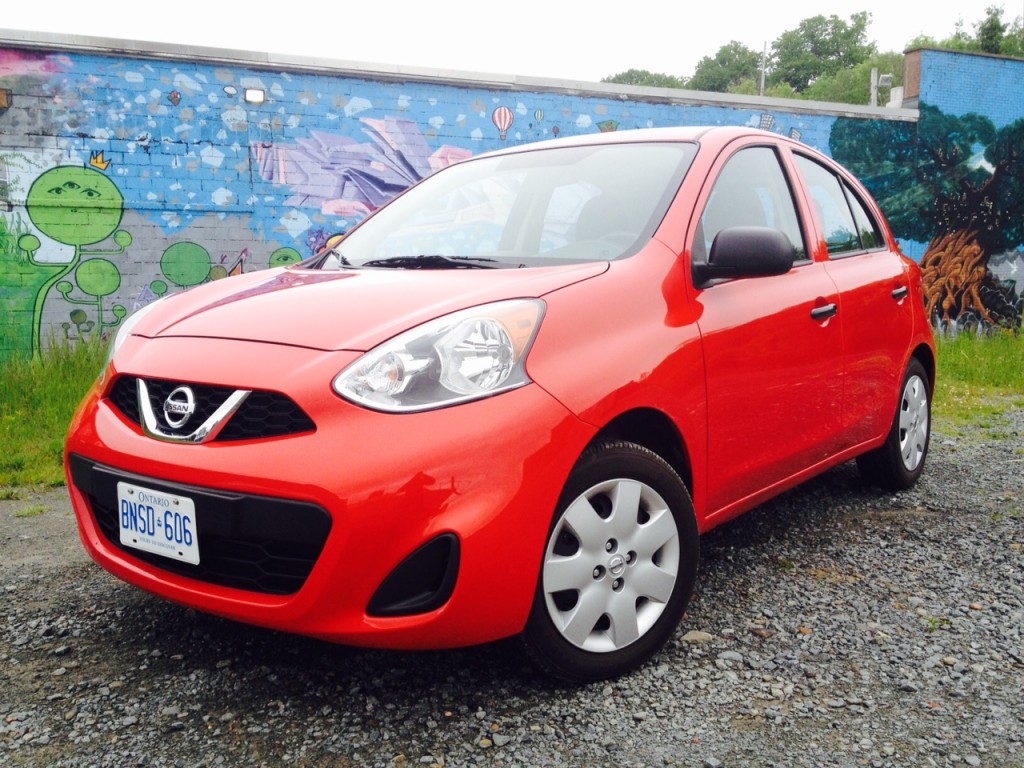