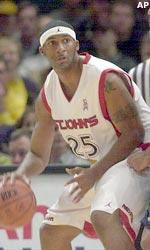 The Halifax Rainmen added two new pieces to the roster Thursday evening.
by Joel MacDougall
With their first pick in the first round of the Premier Basketball League draft the Rainmen selected Aaron Spears, a 6’10″ forward out of St. John’s. Spears will be asked to help fill the void down low for Halifax, as they have been searching for a big body to play close to the bucket.

Spears will be asked to defend against the other bigs in the league while chipping in on the boards and the odd bucket inside.

With their second pick the Rainmen stay with the St. John’s Red Storm alumni and selected 6’7″ forward Kyle Cuffe. He has showed some scoring and rebounding ability while playing Division I in the NCAA, and that will certainly be welcome on the Rainmen squad.

Spears and Cuffe will join a couple of familiar faces to Rainmen fans for the 2011 season. In the last week, the team also re-signed forward Eric “Air Canada” Crookshank, and wing guard, Desmond “Moneyball” Ferguson.

Rainmen President & CEO, Andre Levingston is optimistic that the skill and experience of the veteran players will allow the franchise to reach the Premier Basketball League playoffs for the second year in a row.

“Both of these players earned the status of PBL All-Stars last season, and we’re looking forward to having their continued leadership on and off the court,” said Levingston.

Crookshank, who averaged a double-double, will not only return as a fan favorite but also as the reigning PBL defensive player of the year. Ferguson, who shoots 46% from the beyond the arc, will return as one of the most dangerous outside shooters in the league.

While both players are eagerly awaiting the start of the 2011 basketball season, they are also excited to return to the city of Halifax. Crookshank, who was recently married, has settled his family in HRM and is extremely happy to call Nova Scotia his new home. Ferguson, who has played professionally all around and in the NBA, says there is no other city in the world where he would rather play the game of basketball.

The Rainmen will kick-off the preseason by traveling to Saint John to welcome the Mill Rats to the Maritimes on December 10th. They”ll start the regular season at home against the Vermont Frost Heaves on January 2nd.