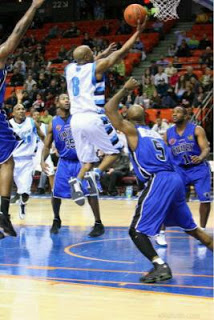 by Jared Hochman
The Halifax Rainmen will look to get back to their winning ways on Saturday when the Kentucky Bluegrass Stallions step into the storm at the Metro Centre.
Catch the action on Haligonia.ca at 7 p.m. Bill and Mavs will have the call.
Halifax (2-1) started the season with two victories, but dropped its most recent decision 105-94 on Tuesday to Lawton-Fort Sill.
Point guard Taliek Brown led the Rainmen with 18 points and six players placed in double figures. Offense wasn’t the problem, however, as it was the defense that let Halifax down.
The Cavaliers were the first opponent to shoot better than 50 per cent for the game (52.2) and reach the 100-point plateau against Halifax this season. Halifax also struggled in the 3-point department, going just 2-for-18 from behind the arc.
Halifax should be able to get its defense back on track against Kentucky, a squad that is the second-worst scoring team in the PBL.
The Bluegrass Stallions are led by former Kentucky State power forward Kenny Jones, who averages 19.5 points and 8.8 rebounds per game, but the team shoots just 42.8 per cent from the field and is an abysmal 21.1 per cent from beyond the 3-point line, a league worst.
Halifax will look to continue its balanced attack, as it has had a different leading scorer each night. Mike Mercer leads the Rainmen with 16.7 points per game, but six other players, including Kavon Jones (15.7), Brown (15.3) and Desmond Ferguson (13.7) also average better than 12 points per contest.
The Rainmen will also look to get back to what is quickly becoming their trademark, and that is going to work on the offensive glass. Halifax leads the PBL with 17 offensive rebounds per game. All those second-and-third chances at the basket translate to easy baskets and less empty possessions.
Veteran Eric Crookshank is again at the heart of the team’s post presence, averaging 5.7 offensive boards per game and 13 rebounds overall. Jones is the other half of the Rainmen’s interior-duo, grabbing 4.3 offensive and 8.7 total rebounds per night.
Halifax owns a rebounding margin of plus-5.67 per game, whereas Kentucky is -5.25. If the Rainmen can continue to control the glass and continue Kentucky’s cold shooting, they should be able to notch their first non-division win and continue the march back to the PBL playoffs.

Jared Hochman is a graduate of the University of King’s College journalism program. You can follow him on Twitter @ JaredLHochman.

Rainmen Gameday; Halifax Looks to Get Back on Track Vs. Kentucky
https://haligonia.ca/rainmen-gameday-halifax-looks-to-get-back-on-track-vs-kentucky-31595/