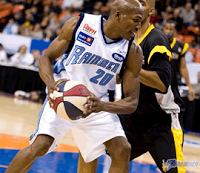 Eric “Air Canada” Crookshank is back as the face of the Rainmen franchise.

The Halifax Rainmen kick off their 2010/2011 PBL season with a highly anticipated exhibition game tonight at the Metro Centre vs. the Saint John Millrats.
The game will be webcast on haligonia.ca, the webcasting home of the Rainmen.
The Millrats moved to the “port city” in New Brunswick from Manchester, New Hampshire. The details of the planned move were first revealed by Haligonia Sports’ Mavs Gillis at the 2010 PBL All Star Weekend in Halifax this past March.
Gillis is back as the play by play voice of the Rainmen and he’ll be joined by a rotation of colour commentators including Bill McLean, Ryan Dickie, and Dan Burrsey.
Romy Aquino is also back at the broadcast table and will be live blogging and messaging with fans throughout the webcast.
Rainmen returnees include the high flying Eric Crookshank and “moneyball” Desmond Ferguson. Halifax’s Les Berry is back for his third season as Head Coach of the Rainmen.
Gametime tonight is 7:00 on haligonia.ca. Mavs, Bill, and Dan will have the call. The game is the first of back to back exhibitions as the Rainmen host the Quebec Kebs tomorrow night, which will also be shown on haligonia.ca.
Comments or questions? Email us at sports@haligonia.ca. Follow us on twitter @haligoniasports.