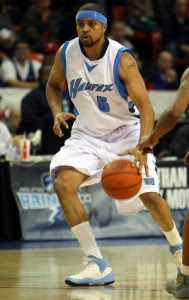 Desmond Ferguson went six for seven from beyond the arc to lead the Rainmen.

THE GIST OF IT
Teamwork and hot shooting helped the Rainmen start their 2011 regular season on a high note.

The Rainmen capped the Vermont Frost Heaves by a score of 109 to 99 in a very exiting game at the Metro Centre on Sunday afternoon.

Both squads matched up well but the Rainmen were playing much more controlled and got to the charity stripe 22 times in the first half.

Practice time must have paid off for all the new faces. The turnover situation was much improved from the preseason games. Players were making their passes in transition and finishing their chances or at least drawing a foul.

WHO DID IT
A huge half from Eric Crookshank allowed the Rainmen to take the lead. In just 16 minutes He pounded Vermont for 15 points and grabbed seven boards. He is still proving his worth as an explosive sixth man and a backup for Dollard. The other Rainmen bigs will need to step up though in order to justify having one of the most explosive players on the bench.

Mike Mercer continues to impress with his consistency. He had 18 for the game and is showing a knack for chasing down offensive put-backs. He is a dynamic, do-it-all wing player that the Rainmen did not have last season.

In the second half, the Rainmen went off. Desmond Ferguson, who missed the preseason with an injury went 6 for 7 from beyond the arc and finished with a game high 27. The Rainmen squad didn’t capitalize on his shooting in the first half but went to a lot once he got hot. It is also worth mentioning that Vermont did not nearly enough defensive pressure on him in the second half.

The Rainmen were getting buckets from everyone Josh Dollard has 12 points, Taliek Brown had 14 and centre Kavon Jones put up 12 points with 12 rebounds as well.

BEYOND THE BOXSCORE
It’s really nice to see the Rainmen’s offense lead by a true point guard. Taliek Brown carries the ball with care and works the clock every single possession. The result is opposing defenses getting frustrated and Brown getting to the free-throw line.

He needs to work on upping his percentages though; he went 10 for 18 against Vermont.

With his passing and his ability to get the line, he could easily be a 10 and 10 guy for the Rainmen all season long.

The Rainmen have also addressed their depth at the power forward / centre spot by signing Torraye Braggs, a veteran of several NBA seasons in the early 2000’s.

HECKLER’S ROW BURN OF THE WEEK
“THREE, TWO, ONE,” Player takes a shot as if the shot clock was expiring “Hahaha there was still time left.”

Peter Clarke lives in Halifax and is a graduate of the Jounalism program at Kings College. Check out his blog at www.rainmen.kingsjournalism.com and follow him on twitter @rainmenblogger.