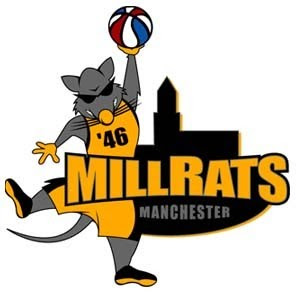 The 4-1 Halifax Rainmen are on the road today facing off against the 2-3 Manchester Millrats (Game Time 5:05 AST).  In their last matchup, the Rainmen defeated the Millrats in the preseason Holiday Classic 101-97 back in December.  Manchester currently has one of the top scorers in the PBL, Eric Gilchrese, who averages 23.5 points per game.  Also on this team, is Luke Bonner, younger brother of Matt Bonner of the San Antonio Spurs and former Toronto Raptor.

Ian McCarthy is the general manager and head assistant coach for the New Hampshire team.  He was named GM of the year in 2007-08 when the team was a member of the ABA.  After their one season in the ABA, the team made the move to the PBL along with the Halifax Rainmen.  I had the opportunity to ask Ian about the upcoming matchup with Halifax, the scouting report on Marlowe Currie and his best Desmond “Moneyball” Ferguson story.
________
Romy (Haligonia.ca): This will be the first regular season matchup between Manchester and Halifax. What will the Rainmen have to do to stop the Millrats this weekend?

Ian McCarthy: So far Halifax appears to be a very good defensive team. We feel we have four of the best guards in the league with Anthony Anderson, Al Stewart, Dwight Brewington, and Eric Gilchrese, so to slow down the Millrats you have to first stop our guards.

Romy (Haligonia.ca):  Who on Manchester will cause the biggest matchup problem for Halifax?

Ian McCarthy: I think Dwight Brewington, who’s been moved from small forward to the point guard position. He’s 6’5 and a great penetrator so if there’s a small guard on him, it’s a mismatch, and it’d be hard for Des to keep him in front as well.

Romy (Haligonia.ca):  Halifax acquired Marlowe Currie from Manchester in a trade earlier this week. What’s the scouting report on Currie?

Ian McCarthy:  Currie’s a poor man’s Larry Bird. He’s a great three point shooter, he can go in the post, and he does the dirty work as well.

Romy (Haligonia.ca):  Who on the Millrats’ current roster has impressed you so far?

Ian McCarthy:  I have a great relationship with several players on our team which stretches back a couple years. Many of them have played with us in the summer, so I have alot of confidence in their abilities. The one guy who’s really impressed me is Eric Gilchrese. I think I am a great judge of talent, but I had no idea Eric would be this good, this soon, when we drafted him. We weren’t sure if we had a roster spot for him at the beginning of the season, but since then he’s become the league’s second leading scorer. What’s funny is that I actually offered him to Vermont, Quebec, and Halifax just to help him, and got no interest. In his first couple games, he scored 26 against Quebec and 21 against Rochester, and suddenly everybody wanted him!

Romy (Haligonia.ca):  So when did you first get involved with the Manchester Millrats organization?

Ian McCarthy:  I founded the franchise in the summer of 2007. The basketball operations actually began in 2005 as the Boston Frenzy, then the Cape Cod Frenzy, and then the Manchester team was started in August of 2007.

Ian McCarthy:  Preseason last year, Des had been in a little slump, and dealing with an injury. When we were playing Vermont in the Green Mountain Tip Off Tournament, we were down 3 or 4 points in the late 4th quarter, and Des caught a pass in transition in front of our bench and as the ball left his hands he shouted “that’s what I doooooo!!”. Of course the 30 footer was nothing but net and he hit two more in the waning minutes to win the game. For the rest of the season, whenever someone did something great in their area, we’d say “that’s what I doooooo!” – even if I made a good signing Des would look at me and say “that’s what you doooo!”. It held special meaning cause it helped us beat our arch rival.

Be sure to check out the Manchester Millrats website, manchestermillrats.com.  The Rainmen play the Millrats tonight in Manchester and both teams meet again on February 14th in Halifax.  Thanks again to Ian for participating in our game preview.