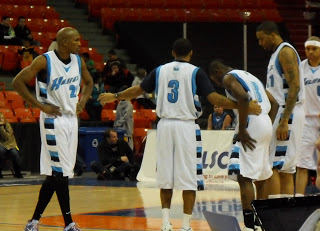 RAINMEN 112, KEBS 87
Adris DeLeon led the Rainmen to victory in Halifax’s regular season home opener at the Metro Centre on Sunday afternoon.  DeLeon came off the Rainmen bench to lead all scorers with 23 points on 6/9 shooting in only 17 minutes of play.  It was a tight game up until the Rainmen finished off the third quarter on an 11-0 run, up 77-64 after three quarters.  As the Rainmen continue their search for their starting centre, coach Les Berry went with the new kid in town, Cory Underwood, to start at the five.  Underwood, formerly with the Albuquerque Thunderbirds of the D-League, finished with 11 points, 7 rebounds, a steal and a block.

The Rainmen continued to pound on the Kebs in the final quarter as Halifax’s offensive weapons, Tony Bennett and Desmond “Moneyball” Ferguson, helped Halifax go on another run in the fourth.  Ferguson nailed back to back threes and then Bennett made three consecutive baskets midway throught the fourth quarter to give Halifax a 25-point lead.

In their home opener before 3,276 fans, the Rainmen used an explosive fourth quarter to swamp the visiting Kebs 112-87 at the Metro Centre, completing a sweep of a home-and-home series that has them on their first winning streak of the young Premier Basketball League season.

Cordell Jeanty who sat out last game against the Rainmen because of injuries fought hard in fourth to keep the Kebs in the game. The Quebec City Kebs played a great game, but fatigue overcame them in the fourth, with three of their strongest players out due to injuries Jonas Pierre (shoulder) Louis Patrick Levros (ankle) and JP Morin (abdomen). The Quebec City Kebs are optimistic that two of the players will return in the next two weeks to play.

Next up, the Rainmen take on the Vermont Frost Heaves at the Metro Centre this Saturday night @ 7pm, live on Haligonia.ca!

Let us know your thoughts on the Rainmen home opener…what areas can the Halifax Rainmen improve on?  Put down your thoughts in the comments section below…

Rainmen Rally in the Second Half to Defeat Quebec - RAINMEN 112, KEBS 87
https://haligonia.ca/rainmen-rally-in-the-second-half-to-defeat-quebec-rainmen-112-kebs-87-10468/