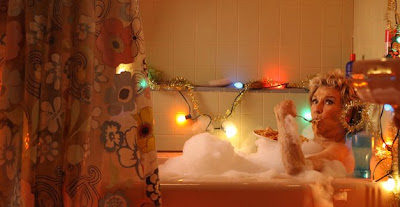 I’m pretty sure “It’s a Hopeful Life” was my favorite episode of Raising Hope so far this season. Sure, it’s not a tremendously original idea for a TV show to do an It’s a Wonderful Life type episode. But Raising Hope did it so well.

After discovering that Hope’s maternal grandparents had sold the story of their serial killer daughter so a movie could be made that was entirely at the Chance family’s expense, Jimmy began to question if having sex with a serial killer in the back of his van was a decision he’d live to regret. It was a valid thought.

It began when Jimmy passed out drunk on the floor of a bar. Without Hope, so much had changed. His parents were separated – though only by a shower curtain – and Virgina weighed 300lbs. After all, she’d quit smoking for Hope. Maw Maw was dead – something that was Jimmy’s fault but she was OK with, telling him “Oh, Heaven’s great. But it’s awfully hot there, there are a lot of fires there, and last night, at karaoke, Idi Amin and Hitler did a great version of ‘Ebony and Ivory’.”

Lucy hadn’t been smacked in the head by Virgina and sent to the electric chair, so she was dating Barney, who’d turned Howdy’s into a liquor store to finance her many demands. Sabrina was working there, but she’d had some work done – 85% of her was the Sabrina Jimmy used to know, and the rest was “perfectly molded silicone”, according to Jimmy. She’d changed, too. “It’s Sapphire now. Ten bucks to see ’em, twenty bucks to feel ’em, fifty bucks for the greatest motorboat of your life.” Unfortunately for Jimmy, he didn’t have $20. Oh, and Frank became mayor because Jimmy didn’t work at Howdy’s and wasn’t around to tell him running was a stupid idea.

And, of course, there was no baby Hope. So Jimmy began desperately trying to sleep with Lucy. That didn’t work out but, of course, it was all just a dream. Jimmy woke up and everything was back to normal. As I said, the theme of the episode wasn’t groundbreaking or anything, but it did provide a plethora of opportunities for comedy. The cast was clearly having a great time, and I had fun watching them.