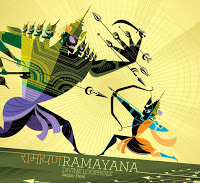 I enjoy world mythologies, but some I understand better than others. I admit I’m less knowledgeable about the Eastern myths than the Western. Thus, when I found the following title, I devoured it whole in an evening.

This book tells a condensed version of the Sanskrit epic Ramayana. Written around 4 B.C., the tale begins with the birth of blue-skinned Rama (the earthly incarnation of Vishnu, the preserver god). Born a prince, he marries Sita (incarnation of the goddess Lakshmi), is exiled to the demon-forests of Dandaka, where he befriends Jambavan the Bear chief and Hanuman the monkey-child-of-a-wind-god, and ultimately faces Ravana (a nine headed demon-king whose name means “the one that makes the universe scream”. There is kidnapping, espionage, and high magic, culminating in an epic battle between good and evil. 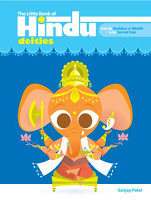 What is most stunning about this book is the artwork. Each set of pages tells a brief chapter, and is paired with elaborate illustrations. Sanjay Patel is a supervising animator for Pixar studios and it shows. The art is crisply modern, split between hand-drawn and computerized techniques.

Also by Patel, try the Little Book of Hindu Deities. Each divine biography, short and sweet, matches an adorable chibi-style Hindu deity. (‘Chibi’, by the way, is a popular style of Manga art, shrinking the subject into a child-like state. Somehow, this works for Brahma’s brood!)