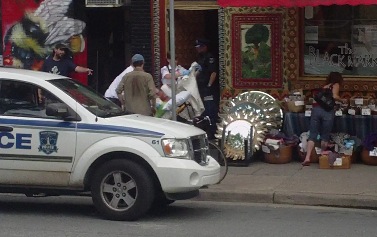 Police respond to an assault near Pizza Corner just after lunch in the Downtown core of Halifax.   Witnesses report an altercation just before the assault took place.

Police at approximately 1 pm, responded to the 1500 Block of Grafton Street; a residential address. There police were meet by a 54 year old male victim who was assaulted by two males. The male victim stated that the two suspects broke into his front apartment door, he fought back and was struck by a blunt object. The two males suspects then fled the apartment toward Spring Garden Road, scaling a barb wire fence.
The suspects were described as light skinned black males, 5"11" to 6' tall, 170 to 190 pounds. They were wearing white basketball T-Shirts, white shorts and sneakers.
The victim was taken to the QEII for treatment with serious but non life threatening injuries.
There was large pedestrian traffic on Grafton Street and Spring Garden Road at this time. Police are asking for the public's assistance in identifying the suspects.. Anyone who has information in relation to this incident are asked to call 490-5016 or contact Crime Stoppers anonymously at 1-800-222-TIPS (8477) or online at www.crimestoppers.ns.ca.