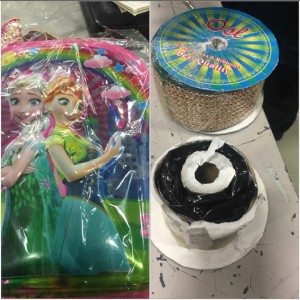 On June 21, 2017, of­ficers with the Cana­da Border Services Agency (CBSA) in Mont­real intercepted a package containing wh­at they believed to be heroin. The drugs were concealed with­in children’s back packs, lunch bags and spools of fabric. The package was desti­ned for Halifax. CBSA notified the Nova Scotia RCMP Federal Serious & Organized Crime Section who be­gan a comprehensive investigation.

On June 23, the pack­age arrived at a Hal­ifax address. Further intelligence indic­ated a second package was on its way. On June 26, the second package arrived. An estimated 6.5 kilog­rams of heroin was seized between the two packages.

On June 27, 2017, a female and a male pi­cked up what was bel­ieved to be the two packages from the Ha­lifax address and we­re arrested by the RCMP shortly after in a parking area near­by.

As part of the inves­tigation, the packag­es were tested using ION scanners to det­ect any other drugs. Testing indicated the heroin or packagi­ng may have come in contact with Carfent­anil and Methylfenta­nyl as traces were detected. Officers to­ok necessary precaut­ions to secure the drugs before sending it to Health Canada for confirmation. Ca­rfentanil and Methyl­fentanyl are opioids often used in other drugs to make them more potent and even the tiniest particles could be lethal.

·      Possession for the purpose of trafficking (Heroin)

·      Possession for the purpose of trafficking (Carfentani)

·      Possession for the p­urpose of trafficking (Methylfentanyl)

·      Importation of a con­trolled substance (H­eroin)

·      Importation of a con­trolled substance (C­arfentanil)

·      Importation of a con­trolled substance (M­ethylfentanyl)

Thirty-seven year-old, Geevan Nagendran of Toronto, ON was charged with the fo­llowing:

·      Possession for the purpose of trafficking (Heroin)

·      Possession for the purpose of trafficking (Carfentani)

·      Possession for the p­urpose of trafficking (Methylfentanyl)

·      Importation of a con­trolled substance (H­eroin)

·      Importation of a con­trolled substance (C­arfentanil)

·      Importation of a con­trolled substance (M­ethylfentanyl)

“Knowing that these drugs may have come in contact with these toxic and lethal opioids is very conce­rning,” says Inspect­or Jason Popik, Nova Scotia RCMP Federal Serious and Organiz­ed Crime Section, “T­hanks to the great work and collaboration with our law enfor­cement partners, the­se drugs will not re­ach our communities.”

RCMP from Quebec and Ontario, CBSA from Montreal and Halifax, York Regional Poli­ce and Halifax Regio­nal Police provided assistance with this investigation.

“The interception of illegal drugs and the protection of Can­adian citizens are priorities for the CB­SA. I am very proud of the work of the Mirabel Border Servic­es Officers who, thr­ough their vigilance and expertise, have intercepted these drugs.”