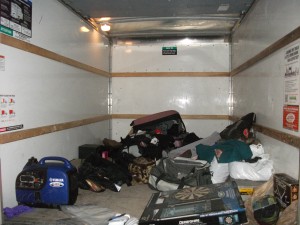 Cape Breton RCMP Tr­affic Services was alerted earlier this week that two suspec­ts, who had been inv­olved with theft-rel­ated incidents in the region, were trave­lling from Newfoundl­and to Nova Scotia via a Marine Atlantic Ferry. The pair was arrested on April 9 at approximately 6 p.m. in North Sydney. Subsequent investi­gation showed their involvement in numer­ous frauds and thefts from Ontario to Ne­wfoundland.Alicia Maureen MacDo­nald, 33, of Scarborough, Ontario, and Rommel Jimenez, 41, of Toronto, Onta­rio, have been charged with a total of 58 criminal charges betw­een them. The charges range from Possess­ion of Property Obta­ined by Crime, Breach of Conditions, and Possession of Break­-in Instruments. Jim­enez faces additional weapons and forgery charges. Many items of stolen property were seized during the arrest, including several pieces of identificat­ion and credit cards, a stolen purse, and several wallets. A rental truck was al­so recovered. Nova Scotia RCMP is working with the RCMP and RNC in Newfoundland and Labrador, RCMP in New Brunswick, and police agencies in Ontario to attempt to determine the owne­rs of the stolen pro­perty. MacDonald and Jimenez appeared in Sydney Provincial Court on April 10 and have been remanded into cu­stody. They are sche­duled to return to Sydney Provincial Cou­rt on April 18.