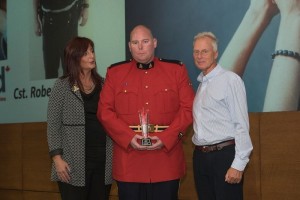 The national award remembers Cst. Terry Ryan, who died in 2002 in an alcohol-related two-car collision on his way home from a police function in Ontario. Each year, a Canadian police officer is honoured for their significant contribution to reducing impaired driving. This year, Cst. Kavanaugh was honoured as one of two award recipients, alongside RCMP Cst. Jasvir Dosanjh of North Vancouver RCMP.

“Cst. Kavanaugh embodies the spirit of the Terry Ryan Memorial Award,” says Insp. Daniel Murchison, Assistant Support Services Officer for Nova Scotia RCMP. “His passion for reducing impaired driving shows through his mentorship of other police officers and his commitment to detecting and processing impaired drivers.”

Cst. Kavanaugh seizes opportunities to share his knowledge with other RCMP members and organizations. He trains officers in Standardized Field Sobriety Tests and educates them to become experts in recognizing drug impairment through his role as a Drug Recognition Expert instructor.

He is a go-to source of information on impaired driving, often coaching others through their investigations. At the detachment level, Cst. Kavanaugh helped create an instruction kit to assist members with issuing blood demands at hospitals. He also regularly shares his knowledge with groups outside of the RCMP, presenting on impaired driving and assisting with MADD Canada checkpoints.

When it comes to detecting and processing impaired drivers, Cst. Kavanaugh is relentless. He uses his skills in Standardized Field Sobriety Tests and his experience as a Drug Recognition Expert to identify impaired drivers and remove them from the road.

Cst. Kavanaugh accepted his award at the MADD Canada 2017 National Leadership Conference in Toronto. In his acceptance speech, he thanked the RCMP for their support as well as MADD Canada for all they do to fight impaired driving.

“Throughout my 11 years with the RCMP, I have seen the consequences of impaired driving first-hand,” says Cst. Kavanaugh. “Having a career where my goal is to reduce those tragedies is very rewarding and being recognized by MADD Canada is a true honour.”