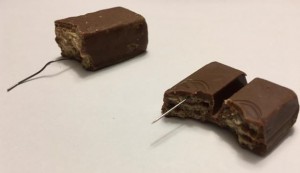 On November 3, Kings District RCMP responded to a call of a chocolate Halloween treat that had a piece of metal embedded in it. The teenaged girl who found it didn’t notice anything unusual about it when she opened the treat, and wasn’t injured when she took a bite of it. She had been in the Port Williams area when she received the treat. Police seized the treat as evidence.

On November 6, Halifax District RCMP responded to a call from a parent of a child who had been trick-or treating in the North Green Rd. area of Timberlea. The child bit into two separate chocolate Halloween treats and found a needle in one, and a paperclip in the other. The child was not hurt and the treats have been seized by the RCMP.

Nova Scotia RCMP continues to ask parents and caregivers to inspect treats that children have received this past Halloween. If you find a treat you feel has been tampered with, please contact your nearest detachment and keep the treat as evidence for the investigator. The RCMP can be contacted anywhere in Nova Scotia by calling 1-800-803-RCMP (7267).