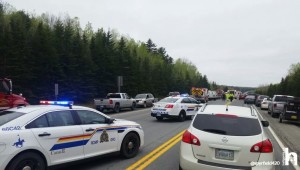 Pictou District RCMP is investigating a fatal collision on Highway 104 in Broadway.

Just before 4 p.m., Pictou District RCMP responded to the collision that involved three vehicles, two of which collided head-on.

The preliminary investigation has determined an SUV was travelling east on Highway 104 near distance marker 188 and crossed the centre line, striking the rear driver’s side of an oncoming pick-up truck. The SUV continued east directly into the path of a westbound car, colliding head-on with it.

A 35-year-old Halifax woman died at the scene. Two children, a three-year-old girl and a four-year-old boy, were in the car with the deceased woman. The boy sustained non life-threatening injuries and was transported to hospital. The girl was not injured. 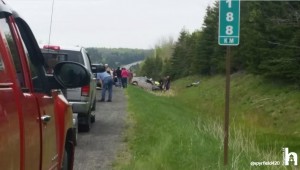 The 72-year-old female driver of the SUV from Pomquet sustained serious injuries and was transported via LifeFlight to hospital in Halifax. The occupants of the pick-up truck were not injured.

Highway 104 is closed in both directions and traffic is diverted to Highway 4 between Exits 27 and 29. Traffic is expected to be diverted until late this evening.

Our thoughts are with the victim’s family and friends at this difficult time. 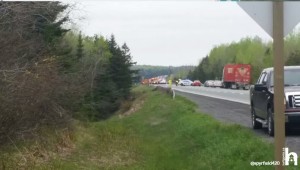