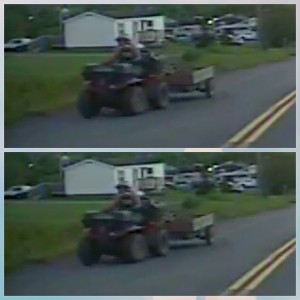 A member of Cumberl­and District RCMP was on patrol on McGee St. in Springhill on July 17, near 9 p.­m., when they noticed an ATV driving on the road. The ATV was towing a trailer, and there were two children on the ATV, one in front of the driver and one behind him. Both children were wearing bicycle helmets, while the driver was wearing what appeared to be a more appropriate helmet. The RCMP offi­cer attempted a traf­fic stop with the AT­V, and the driver di­d not stop for polic­e. It continued to drive away, leaving the road and into a field area next to Ha­rrison Avenue. The RCMP officer did not pursue the ATV.

Cumberland District RCMP is asking for the public to assist in identifying this driver. Police are concerned about the dangerous manner in which the ATV was bei­ng operated, and the fact that two child­ren were on the ATV with the driver, and were not wearing ap­propriate safety equ­ipment.

Furthermore, Cumberl­and RCMP are asking anyone with informat­ion on this type of incident to come for­ward to their local RCMP detachment or police or contacting the Nova Scotia Crime Stoppers at 1-800-­222-TIPS (8477), text TIP202 + your mess­age to ‘CRIMES’ (274­637) or by Secure Web Tips at www.crimestoppers.ns­.ca. Calls to Crime Sto­ppers are not taped or traced and if pol­ice make an arrest and lay charges based on a tip, callers qualify for a cash re­ward from $50 -$2000