Update:  The 23-year-old person who was reported missing from Wagmatcook on January 26, is no longer considered a missing person. 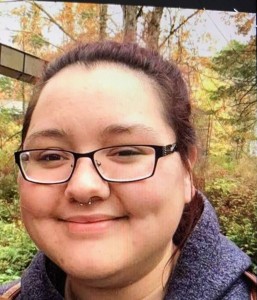 Wagmatcook RCMP is asking for help from the public to locate 23-year-old Starr Francis-Smith, missing from the Wagmatcook First Nations in Cape Breton.

Starr Francis-Smith was last seen on January 25 at approximately 2:30 p.m. leaving a home on Fishery Rd. and has not been seen since. Starr Francis-Smith left with her boyfriend in a black Jeep Grand Cherokee with Nova Scotia Volunteer Firefighter licence plate AKA2. Police are concerned for her well-being.

Starr Francis-Smith is described as 5-foot 4 and 200 lbs, with brown hair and brown eyes. She has a nose ring and wears glasses.

Anyone with information regarding the whereabouts of Starr Francis-Smith is asked to contact Baddeck RCMP at 902-295-2350. Should you wish to remain anonymous, call Nova Scotia Crime Stoppers toll free at 1-800-222-TIPS (8477), submit a secure web tip at www.crimestoppers.ns.ca, or use the P3 Tips App.

(Found) RCMP is asking for help from the public to locate 23-year-old Starr Francis-Smith
https://haligonia.ca/rcmp-is-asking-for-help-from-the-public-to-locate-23-year-old-starr-francis-smith-273849/