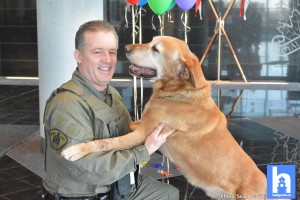 It’s time to hang up the leash and badge for Jake, a nearly 11-year-old Fox Red Labrador Retriever who officially retires from the RCMP as a Police Service Dog (PSD) on Friday, February 23. Jake, who hails from Big River, Saskatchewan, served for 9 1/2 years. 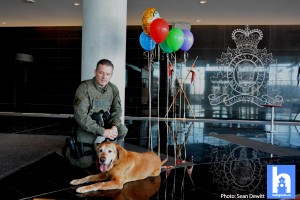 To mark the occasion, RCMP are throwing a retirement pawty at 10 a.m. at Nova Scotia RCMP Headquarters. 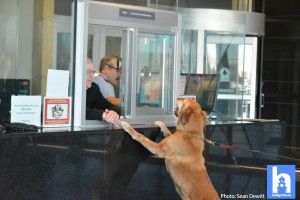 Jake and his partner/handler Cst. Mark Flanagan have worked with the Criminal Interdiction Team at Halifax Stanfield International Airport and most recently, at Nova Scotia RCMP Headquarters as part of the Federal, Serious, and Organized Crime Unit. They played an instrumental role in proceeds of crime investigations and sniffed out over $3.4 million dollars in cash from seizures across the province. Jake also found over $1 million dollars’ worth of cocaine.

While Jake will retire from his important role with the RCMP, he is looking forward to taking it easy as Cst. Flanagan’s pet. He looks forward to extra belly rubs and going swimming. Most importantly, Jake will remind Cst. Flanagan to try not to wake him each morning as he leaves for work.

** Jake will return home with his handler where he will remain part of the family.