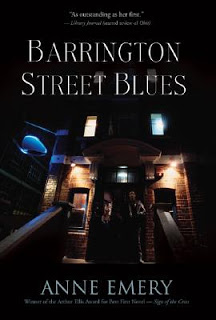 Halifax has a long literary tradition. The library website hosts a Literary Walking Tour which guides the reader around Halifax’s literary monuments. From our Roots to the Past website:

Are you wearing proper walking shoes?”

If you are not inclined to lace up your sneakers, you might prefer to explore Halifax with a few contemporary authors. 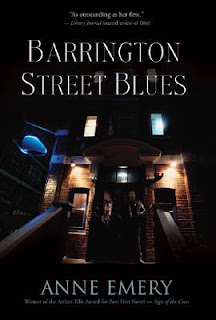 Barrington Street Blues by Anne Emery is third in the series of Monty Collins mysteries. Emery, a lawyer herself, has created Monty Collins, a bluesman lawyer. Collins finds himself in seedy bars in downtown Halifax investigating what he suspects to be a double murder. Barrington Street Blues was given a starred review in Library Journal. The reviewer praises her saying, “…is a master at creating a sense of place (in this case, her hometown of Halifax, N.S.) and developing characters—talents that place her in the same rarefied circle as Margaret Maron, Marcia Muller, and Sara Paretsky.” 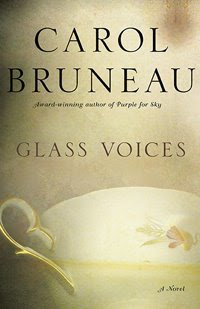 More than any other event in the 20th century, Halifax was defined by the 1917 Explosion. In Glass Voices by Carol Bruneau Lucy Caines and her husband were one of thousands of victims of the Explosion, losing their young daughter. Now, as a woman of 71 years, Lucy has time to reflect on her life as she sits with her husband who has suffered a stroke. Never truly getting past her daughter’s loss, she invested much emotion in her young son. Harry, her husband, proved to be a disappointment as he chose gambling and other illegal activities as a way of life. The novel spans from 1917 to the 1960’s giving the reader the opportunity to see changes in both the world and in Lucy as she comes to terms with her difficult life.

Going back in time to the early 1860’s we have The Halifax Connection by Marie Jakober. It is the story of a romance between a working class girl and an aristocratic boy set against the backdrop of pre-confederation Canada. Erryn Shaw has been banished from his comfortable home in England to Canada where he is convinced to act as a spy for the British against the Southern Confederates. Jakober brings to life a lesser known connection between Halifax and the American Civil War.

Growing up in a boxing centred family inspired Elaine McCluskey’s first novel Going Fast. Ownie Flanagan, an old-time trainer, yearns for the day when Halifax was a boxing town. Before he retires, he hopes to find that one last great boxer. Perhaps he has found it in Trinidadian Turmoil Davis. Davis and Flanagan are the glue that hold her motley crew of characters together. McCluskey launched her book at the Ultimate Dojo in Dartmouth last March.