Read Your Way Around the World invites you to Ethiopia.

Ethiopian writers, until recent years, elected to write for a local audience in their native languages. More writers are now employing English and Arabic and in this way reaching out to a greater world audience. In seeking out Ethiopian writers in the library’s collection I found very few: Selamawi Asgedom, Maaze Mengiste, and Nega Mezlekia. 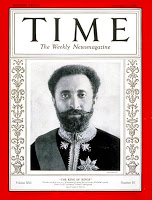 Ethiopia has had a long history of independence. It is one of the oldest countries in the world with claims to evidence of the oldest human ancestor. The twentieth century was dominated by Emperor Hailie Sellasie, whose impassioned speech to the League of Nations brought him to the world’s attention and made him Time magazine’s Man of the Year for 1935. He worked towards modernizing Ethiopia, but the benefits failed to reach the poorest and he was deposed in the 1974 revolution. The 1980’s were marked by drought and famine, and while the numbers have never been confirmed, there were probably hundreds of thousands of deaths. Modern Ethiopia remains somewhat politically unstable, but their economy is growing despite not being an oil producing African country.

Flashman on the March by George MacDonald Fraser features mad Abyssinian King Theodore who holds a group of Europeans hostage. Sir Harry Flashman, a roguish adventurer and soldier, volunteers for this mission to the African empire as a way of extracting himself from a sticky situation with an Austrian princess.

An Ethiopian village strives to preserve its way of life in the midst of twentieth century changes in The Unfortunate Marriage of Azeb Yitades by Nega Mezlekia. An American Missionary family arrives and challenges the village’s customs.

Beneath the Lion’s Gaze by Maaza Mengiste tells the story of the 1970’s civil war in Ethiopia. This epic tale illustrates the effect of the Selassie regime, the revolution and the resulting government has on one family.

Ethiopia in the 1980’s will always be about famine. In To Asmara by Thomas Keneally Eritrean rebels destroy a food convoy intended for the famine victims. Keneally writes a fictionalized investigative novel exploring the Eritrean side of this event.

Sweetness in the Belly by Camilla Gibb tells the story of a white British Muslim woman who flees Ethiopia after Selassie is deposed. Lily never really fits into either culture. The storyline varies between the 1970’s in pre-revolutionary Ethiopia and the 1980’s in impoverished urban London. Lily fears for her lover left behind in Ethiopia while working to connect displaced Ethiopian refugees.

In Operation Rimbaud by Jacques Godbout Michelle Larochelle is asked to perform a secret mission “Operation Rimbaud” for Haille Sellassie to retrieve the stone tablets “tablets of law” bearing the Ten Commandments. Set in 1967, Larochelle ventures to a country on the brink of revolution. A sort of Indiana Jones-style story with the emphasis on the inner struggle.

Read Your Way Around the World - Ethiopia
https://haligonia.ca/read-your-way-around-the-world-ethiopia-39370/