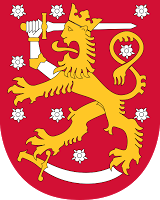 ead Your Way Around the World invites you to Finland. Finns are a nation of avid readers. Only Iceland produces more books per capita. The Finnish literature is relatively young. Not too much is found that pre-dates the seventeenth century. The official language of government was different than the language spoken by the majority of the population for much of Finland’s history. You will still find novels written by Finnish authors today in Swedish or Norwegian. So not surprisingly establishing a national identity is a common theme.
I 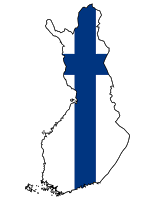 n the twentieth century Finland was hugely impacted by the two wars having only gained its independence in 1917. The 1950’s saw Finland rapidly move from an agrarian to a more urbanized society. Modern Finland has an enviable reputation in the world for peace and prosperity.
Let’s explore Finland and Finnish literature with these novels translated into English from Finnish, Swedish and Norwegian.
The Year of the Hare
by Arto Paasilinna

“Suddenly realizing what’s important in life (with the help of a bunny), a man quits his job and heads to the countryside in this internationally bestselling comic novel. Which of us has not had that wonderfully seditious idea: to play hooky for a while from life as we know it?” With these words from his foreword, Pico Iyer puts his finger on the exhilaratingly anarchic appeal of The Year of the Hare. While out on assignment, a journalist hits a hare with his car. This small incident becomes life-changing: he decides to quit his job, leave his wife, sell his possessions, and spend a year wandering the wilds of Finland-with the bunny as his boon companion.” publisher
The American Girl
by Monika Fagerholm

“In 1969, a young girl makes a trip from Coney Island to the swampy coastland on the rural outskirts of Helsinki, Finland. There, her death will immediately become part of local mythology, furnishing boys and girls with fodder for endless romantic imaginings. Everyone who lives near the swamp dreams about Eddie de Wire, the lost American girl. . . . For both Sandra and Doris, two lonely, dreaming girls abandoned in different ways by their parents, this myth will propel them into their coming-of-age through mischievous role-playing games of love and death, in search of hidden secrets, the mysteries of the swamp, and the truth behind Eddie’s death. The girls construct their own world, their own language, and their own rules. But playing adult games has adult consequences, and what begins as two girls just striking matches leads to an inferno that threatens to consume them and tear their friendship apart.” publisher
When I Forgot
by Elina Hirvonen

“Given its surprising beauty and assured voice, it’s hard to believe that When I Forgot is Elina Hirvonen’s first novel. While on her way to the hospital where her brother is institutionalized, Anna experiences a moment of recollection so arresting it shatters her world — a recollection of searing pain and madness. Exploring psychological trauma, the boundaries of memory, and the political ramifications of September 11, 2001, When I Forgot offers gripping insights into the universal themes of suppressed pain and, above all, retaining a sense of hope in an increasingly grim world.” publisher
Fair Play
by Tove Jansson

“Fair Play is the type of love story that is rarely told, a revelatory depiction of contentment, hard-won and exhilarating. Mari is a writer and Jonna is an artist, and they live at opposite ends of a big apartment building, their studios connected by a long attic passageway. They have argued, worked, and laughed together for decades. Yet they’ve never really stopped taking each other by surprise. Fair Play shows us Mari and Jona’s intertwined lives as they watch Fassbinder films and Westerns, critique each other’s work, spend time on a solitary island (recognizable to readers of Jansson’s The Summer Book), travel through the American Southwest, and turn life into nothing less than art.” publisher
Purge
by Sofi Oksanen
“

An international sensation, Sofi Oksanen’s award-winning novel Purge is a breathtakingly suspenseful tale of two women dogged by their own shameful pasts and the dark, unspoken history that binds them.When Aliide Truu, an older woman living alone in the Estonian countryside, finds a disheveled girl huddled in her front yard, she suppresses her misgivings and offers her shelter. Zara is a young sex-trafficking victim on the run from her captors, but a photo she carries with her soon makes it clear that her arrival at Aliide’s home is no coincidence. Survivors both, Aliide and Zara engage in a complex arithmetic of suspicion and revelation to distill each other’s motives; gradually, their stories emerge, the culmination of a tragic family drama of rivalry, lust, and loss that played out during the worst years of Estonia’s Soviet occupation.” publisher

Read Your Way Around the World - Finland
https://haligonia.ca/read-your-way-around-the-world-finland-46718/