Read your way around the world invites you to a tour of Iceland. 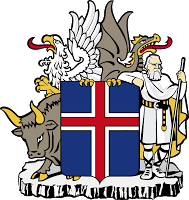 Iceland is an European island country in the North Atlantic, roughly twice the size of Nova Scotia, with approx. 1/3 of the population. A geographically remote country, but one which has a long tradition of storytelling. From the 13th century’s Norse sagas and Skaldic poetry, all the way to the early 20th century expressionist literature of Halldór Laxness. And for some strange reason, Iceland’s current literary specialty is crime fiction – e.g. Yrsa Sigurðardóttir and Arnulder Indridason have both become global best selling authors.

To experience a bit of Iceland for yourself, why not strap on your literary hiking boots and head to the land of glaciers, volcanoes and Norse ghosts (and Björk).

“Sometimes grim, sometimes uproarious, and always captivating, Iceland’s Bell by Nobel Laureate Halldór Laxness is at once an updating of the traditional Icelandic saga and a caustic social satire. At the close of the 17th century, Iceland is an oppressed Danish colony, suffering under extreme poverty, famine, and plague. A farmer and accused cord-thief named Jon Hreggvidsson makes a bawdy joke about the Danish king and soon after finds himself a fugitive charged with the murder of the king’s hangman. In the years that follow, the hapless but resilient rogue Hreggvidsson becomes a pawn entangled in political and personal conflicts playing out on a far grander scale.” – Publisher

“Laxness is a poet who writes to the edge of the pages, a visionary who allows us a plot: He takes a Tolstoyan overview, he weaves in an Evelyn Waugh-like humor; it is not possible to be unimpressed.” -Daily Telegraph

“At a university in Reykjavík, the body of a young German student is discovered, his eyes cut out and strange symbols carved into his chest. Police waste no time in making an arrest, but the victim’s family isn’t convinced that the right man is in custody. They ask Thóra Gudmundsdóttir, an attorney and single mother of two, to investigate. It isn’t long before Thóra and her associate, Matthew Reich, uncover the deceased student’s obsession with Iceland’s grisly history of torture, execution, and witch hunts. But there are very contemporary horrors hidden in the long, cold shadow of dark traditions. And for two suddenly endangered investigators, nothing is quite what it seems . . . and no one can be trusted. ” – Publisher

“… Scudder provides such a smooth translation, right down to the slang used by Harald’s college friends, that an engaged reader can easily forget this was originally written in Icelandic. Featuring two fleshed-out, involving lead characters and unusual witchcraft details, this is recommended for all public libraries, and readers’ advisors can suggest this title to patrons who enjoy Scandinavian mysteries by Helene Tursten and Asa Larsson.” – Library Journal

“A man is found murdered in his Reykjavik flat. There are no obvious clues apart from a cryptic note left on the body and a photograph of a young girl’s grave. Detective Erlendur is forced to use all the forensic resources available to find any leads at all. Delving into the dead man’s life he discovers that forty years ago he was accused of an appalling crime. Did his past come back to haunt him? Finally, Erlendur’s search leads him to Iceland’s Genetic Research Centre in order to find the disturbing answers to the mystery. This prizewinning international bestseller is the first in a new series of crime novels set in Iceland.” – Publisher

“So let me say this. Tainted Blood is a taut, well-executed police procedural, set in grey, rainy Reykjavik, the capital of Iceland. It grips from the first page, each sentence beautifully written, propelling the story forward without wasting one word.” – Reading Matters

“When the body of a young man is found floating off the Icelandic village of Hvalik, no-nonsense cop Gunnhildur “Gunna” Gisladottir, the star of British journalist Bates’s crackling fiction debut, assumes it’s an accidental drowning. But when Gunna and her team discover that the victim worked for a Reykjavik PR firm with ties to a contentious local aluminum smelter project despised by the environmental group Clean Iceland, they realize that homicide, rare as it is in the island nation, is more likely. …Bates, who lived in Iceland for a decade, imbues this series first with a palpable authenticity.” – Publisher’s Weekly

“British author Bates, a former Iceland resident, captures the chilly spirit of Nordic crime fiction in what is the apparent start of a promising series with a distinctly appealing protagonist. Fans of Arnaldur Indridason’s Reykjavík mysteries will want to add Bates to their reading lists.” – Booklist

Ring of Seasons : Iceland, its culture and history
by Terry G. Lacy (1998)

“A remote island with a rich and ancient literature. A land of hot springs and volcanoes. A country with an extraordinary history, a challenging geography and a vibrant contemporary culture. A land of ice. InRing of Seasons, Terry Lacy–an American who has lived in Iceland for twenty-four years– brings both the perspective of the outsider and the familiar eye of the long-term resident to this delightful exploration of all facets of Iceland, past and present. She conveys her story with a skillful interlacing of history, religion, politics, and culture to paint a vivid picture of the way Icelanders live today as members of a wealthy society still very dependent upon nature–from a reliance on her icy waters to support an international fishing industry to a watchful cohabitation with the volcanoes that both destroy villages and create new islands.

This is a book for all who have been charmed by reading the Norse sagas, for all those intrigued by the country that can claim the oldest living democracy. It is an excellent introduction for anyone planning to visit Iceland and a delightful read for all those who do their exploration from the comfort of an armchair. Terry G. Lacy is an American currently residing in Reykjavik, Iceland.

The Far Traveler : voyages of a Viking woman
by Nancy Marie Brown.

“Five hundred years before Columbus, a Viking woman named Gudrid sailed off the edge of the known world. She landed in the New World and lived there for three years, giving birth to a baby before sailing home. Or so the Icelandic sagas say. Even after archaeologists found a Viking longhouse in Newfoundland, no one believed that the details of Gudrid’s story were true. Then, in 2001, a team of scientists discovered what may have been this pioneering woman’s last house, buried under a hay field in Iceland, just where the sagas suggested it could be.

Joining scientists experimenting with cutting-edge technology and the latest archaeological techniques, and tracing Gudrid’s steps on land and in the sagas, Nancy Marie Brown reconstructs a life that spanned-and expanded-the bounds of the then-known world. She also sheds new light on the society that gave rise to a woman even more extraordinary than legend has painted her and illuminates the reasons for its collapse.” – Publisher

“The definitive profile of recording artist Bjork. With exclusive access to the artist, the documentary gives viewers an insider’s view of her life her thoughts and her motivations.” – Publisher

“In 2006, having toured the world over, Sigur Rós return home to play a series of free, unannounced concerts in Iceland. Heima is a unique record of that tour, filmed in 16 locations across the island, taking in the biggest and smallest shows of the band’s career.” – Publisher

Read Your Way Around the World - Iceland
https://haligonia.ca/read-your-way-around-the-world-iceland-42321/