Read Your Way Around the Word invites you to Malta. 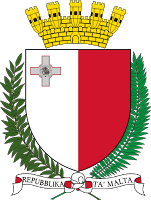 Malta is a tiny island located in the Mediterranean and is one of the world’s smallest and most densely populated states. The island’s location has given it a strategic importance and Malta has found itself to be the center of turmoil and conflict. Dramatic Maltese history has found its way into North American fiction focusing largely on the Knights of Malta, the Barbary Corsairs and the Siege of Malta in World War II.

The Information Officer (M) by Mark Mills is historical fiction, plus a love story, plus a mystery, situated on the island of Malta during World War II. Malta suffered more bombs at the hands of the Germans in a short two months than hit London during a year of the Blitz. Max Chadwick of the RAF is responsible for keeping up morale and must tread carefully when a young Maltese woman is murdered and the suspect is a British serviceman.

Ironfire (M) by David Ball goes way back in time. In 1565 Malta occupied a strategic location in the Mediterranean. Nico, a young Maltese boy, is abducted by Algerian Corsairs. To save his own life, he converts to Islam and eventually captains one of the Sultan’s ships. Nico becomes conflicted between his loyalties to his Christian heritage and his new Muslim life.

A Distant Magic (M) by Mary Jo Putney features magic, time travel and adventure. Set in 1753 Nikolai Grigorio, a pirate, kidnaps Jean Macrae – a woman with magical powers – as revenge for her father’s actions decades before. Grigorio grew up an orphan on Malta and was kidnapped by pirates. Grigorio is also magical and he and Macrae combine their powers to survive a terrible storm. Their relationship develops as does their work in the abolitionist movement.

In the sixteenth century Turkish forces laid siege to the Island of Malta to conquer the Knights of Saint John the Baptist. In The Religion (M) by Tim Willocks, the hero, Tannhauser, is a hired “gun” (sword?) employed by a French countess to reclaim her kidnapped son. (Did Malta have the market on kidnapped children?!). This epic tale is the first in a trilogy.

A Dead Man in Malta (M) by Michael Pearce takes us back once again to the twentieth century. It’s 1913 and there are three suspicious deaths on the island. Scotland Yard’s Sandor Seymour is dispatched to investigate. Two British sailors and a German balloonist die unexpectedly after being admitted to a Maltese hospital in good heath. Seymour, who is routinely sent about Europe, investigates this possible murder.

It’s 1942 and poor tiny Malta is under siege by German and Italian forces. Rocco Raven, an American mechanic, falls in love with Melita, a beautiful Maltese woman who repairs jukeboxes (hence the title The Jukebox Queen of Malta (M) by Nicholas Rinaldi. This is a wartime love story set against the deprivation and violence Malta endured.

Read Your Way Around the World - Malta
https://haligonia.ca/read-your-way-around-the-world-malta-69491/