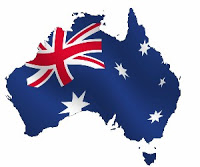 On January 26th, while those of us in Canada don our hats and scarves and head out to work and school and whatever else we’re up to in the latest blast of cold, wintry weather, Australians celebrate their nation’s birthday with a holiday and (invariably) a trip to the beach, or the pool, or the park.

I think Canadians naturally have a curiosity about Australia – a fellow Commonwealth country – but a country which, climatically couldn’t be more different from our own. While many Canadian readers may be familiar with some historical depictions of Australia – through, for example the 1980s classic family epic The Thorn Birds or Peter Carey’s Booker Prize Winning novel of outback outlaw Ned Kelly, The True History of the Kelly Gang – for this post, I wanted to focus on more modern depictions.
Curious about life in current day Australia? Dip into one of these titles and discover a country that is has much in common – and much drastically different – from our own.

A book that created a lot of buzz when it was released last year is Christos Tsiolkas‘ The Slap. The publisher sets the scene as “At a suburban barbecue, a man slaps a child who is not his own. This event has a shocking ricochet effect on a group of people, mostly friends, who are directly or indirectly influenced by the event.” The book won the Commonwealth Writers Prize and several Australian book awards. It’s a thought provoking look into family and life 21st century Australian society that has many parallels to our own.

Publishers Weekly magazine describes The Good Parents by Joan London as “an excellent family drama rooted in rural Australian lives“. A young woman moves to Melbourne from the country, becomes involved with her much older new boss. When her parents come to Melbourne to visit and find her missing they dig through their own memories as well as their daughter’s new life for an explanation in a story that jumps between present day and the past.

I’ve written in another post about the possible folly involved in reading crime novels for a slice-of-life look at another country, but in addition to the thrill and suspense of the plot, crime novels do often give a good glimpse into modern societies.

Frequently compared to series’ by Kathy Reichs and Patricia Cornwell, the Dr. Anya Crichton series by Kathryn Fox takes the popular phenomena of forensic thrillers and sets them down under. Booklist magazine’s review of the Malicious Intent, the first in the series, proclaimed “A delicious buildup of clues and plenty of gruesome details will please genre devotees, as will the satisfying outcome, which is likely to surprise even a few seasoned thriller fans.

“Garry Disher is a veteran Australian mystery writer of several series and standalone titles, including the well received Inspector Hal Challis series of police procedural novels. The lead character investigates crime in a region outside of Melbourne called the Mornington Penisula – known more for its beach towns and summer respite from the big city than its high crime. Comparisons between Disher and Scottish writer Ian Rankin are common and Booklist Magazine also praised Disher’s novels saying “Tell procedural devotees to take a break from the familiar American and British mean streets and sample a little noir under the Australian sun.”
And if you’re looking for a little real life adventure, you may enjoy Thumbs Up Australia: Hitchhiking the Outback by Tom Parry. Here in Canada, the cross-country journey is a bit of a rite of passage, in Australia it’s the round-Australia journey. Parry, a British journalist wrote this memoir of a trip he took with his girlfriend. The Daily Mirror (which is admittedly the paper that Parry works for) describes the books as a”gripping, funny and enlightening account of an 8,000-mile hitchhike around Oz“.

For other books by Australians and featuring Australian settings (including some historical titles) visit the library’s website Read Your Way Around the World section on our website and click on the list for Australia.

Read Your Way Around the World: Modern Day Australia
https://haligonia.ca/read-your-way-around-the-world-modern-day-australia-11022/