With the 2010 Fifa World Cup looming, South Africa has been in the news a lot lately.

Unfortunately the excitement around this big event has been very much tempered by the talk of protests and the risk of violence. This seems to parallel much of the modern South African experience, one of incredible beauty and richness, underwritten by lingering racial tensions and flashes of violence.

Much of contemporary South African writing speaks to these conditions. Hop on board as we take a literary exploration of the Rainbow Nation.

A Beautiful Place to Die: a novel by Malla Nunn 2009

“This skillfully constructed and involving debut-intended as the first in the Detective Emmanuel Cooper series-reveals the terrible toll of apartheid and belongs in all mystery collections. Background: Nunn, a South African-born writer, begins her series in 1952 with the murder of a white police captain in a small South African town riddled with apartheid. The victim was a son-in-law of a leader of the Afrikaner nationhood movement, and his five adult sons are out for vengeance. Arriving from Johannesburg to investigate, Det. Sgt. Emmanuel Cooper wrestles with the police Special Branch, whose officers are searching for communist connections to the crime. Making matters worse, he is targeted by official and unofficial law enforcers as he stretches the boundaries between black and white.” ~ Library Journal 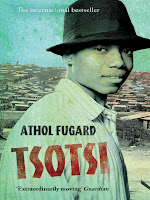 “Set amid the sprawling Johannesburg township of Soweto, where survival is the primary objective, “Tsotsi” traces six days in the life of a ruthless young gang leader. When we meet Tsotsi, he is a man without a name (tsotsi is Afrikaans for “hoodlum”) who has repressed his past and now exists only to stage and execute vicious crimes. When he inadvertently kidnaps a baby, Tsotsi is confronted with memories of his own painful childhood, and this angry young man begins to rediscover his own humanity, dignity, and capacity to love.“~ Publisher.
See also: the 2006 Miramax film version on dvd

The Madonna of Excelsior, by Zakes Mda. 2004

“In his best work to date (Heart of Redness), Mda continues his clear-eyed and compassionate portrayal of the new South Africa and the legacies of apartheid. During apartheid, sex between whites and blacks was forbidden by law, yet it was not unusual to see mixed-race children in the villages. In the early 1970s, protagonist Niki was charged with violating the Immorality Act, along with 18 others. Although no one was convicted, Niki, black son Viliki, and mixed-race daughter Popi have had to face the consequences every day thereafter. Through Popi, Mda shows that beauty can come out of even the darkest oppression and that freedom without reconciliation is an empty victory. Throughout, the author masterfully fuses descriptions of paintings with depictions of daily life, achieving with words what is usually possible only on film and making the novel itself a work of art.” ~ Library Journal

“The first time I saw him I thought, he won’t last, says former soldier and physician Frank Eloff, recalling his initial meeting with idealistic colleague Laurence Waters. This is the beginning of a precarious friendship between the two doctors at a rural desert hospital in postapartheid South Africa. Told from the perspective of the disillusioned Eloff, Galgut’s fifth novel possesses the economy and pace of Hemingway and the lyrical grace of Graham Greene. A native of Pretoria, Galgut embraces the themes of allegiance, betrayal, deception, and self-deception in a world where the past is demanding restitution from the present. Eloff and Waters are polar opposites, and by uniting them, the author renders a quietly compelling examination of the chasms that exist in the new South Africa and the moral challenges that lie in apartheid’s wake. This moody and memorable parable of the corruption of the flesh and spirit was shortlisted for the 2003 Booker Prize” ~ Booklist

“Nobelist Mandela, who fought to end apartheid and became the first president of South Africa to gain power through a multiracial election, is the subject of at least four graphic biographies. This one is the longest and most up-to-date, bears the stamp of approval from the Nelson Mandela Foundation, and features a foreword by Mandela himself, who quips, “You know that you are really famous the day that you discover that you have become a comic character.” ~ Library Journal

South Africa’s Brave New World: the beloved country since the end of aparthied, by R.W. Johnson. 2009

“Nelson Mandela’s inauguration as president of South Africa in 1994 seemed to usher in an age of peaceful, rational change. In this updated edition, RW Johnson explains how this was not to be. The profound damage of apartheid and the country’s new leaders – in exile or prison for much of their adult lives – were a disastrous combination that poisoned everything from big business to education and AIDS policy to relations with Zimbabwe.

At the heart of the book lies the figure of Thabo Mbeki, whose presidency led to catastrophic failure on almost every front. In South Africa’s Brave New World Johnson reveals how Mbeki and those around him brought South Africa close to “failed state” status – and explores the implications for its future.” ~ Publisher

Incognero: a memoir of exile & aparthied,
by Frank B. Wilderson. 2009

“Nelson Mandela calls Wilderson a threat to national security. Wilderson asks, Why does Mandela compromise? Radical, defiant, and searingly honest, this memoir about being active in the freedom struggle in the U.S. and in post-apartheid South Africa is bound to spark passionate argument as Wilderson weaves together his personal story with his politics, always critical of those in power. The only black kid in his suburban Minnesota school, he grows up hearing the n-word all the time. His parents beat him for refusing to pledge allegiance. A graduate of Dartmouth, on the faculty at Berkeley, he confronts the prejudice behind New Age facades. In Johannesburg in the 1980s and early 1990s, he joins the African National Congress. Occasionally, the account flags with too much detail on the author’s experiences in both countries, back and forth over time, but what holds you fast is his lack of reverence and self-importance; he is as candid about his attraction for white women as he is about his nostalgia for a homeland that never was.” ~ Booklist

Read Your Way Around the World - South Africa
https://haligonia.ca/read-your-way-around-the-world-south-africa-17023/