Read Your Way Around the World invites you to Zimbabwe home of NoViolet Bulawayo, a young woman who has come to the world’s attention this year with her Man Booker Prize nominated We Need New Names (M). 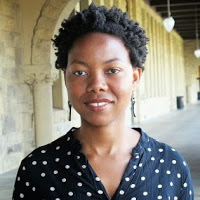 Bulawayo, the first black African woman to be nominated for the Booker prize, was born in Zimbabwe in 1981, and has pursued higher education in the United States. In 2011 she won the Caine Prize for African Writing and was shortlisted for the South Africa PEN Studzinsi Award. We Need New Names reflects Bulawayo’s experience as 10 year old Darling shares her childhood years in Zimbabwe and then her teenage years in the US.

“Darling is only 10 years old, and yet she must navigate a fragile and violent world. In Zimbabwe, Darling and her friends steal guavas, try to get the baby out of young Chipo’s belly, and grasp at memories of Before. Before their homes were destroyed by paramilitary policemen, before the school closed, before the fathers left for dangerous jobs abroad. But Darling has a chance to escape: she has an aunt in America. She travels to this new land in search of America’s famous abundance only to find that her options as an immigrant are perilously few. NoViolet Bulawayo’s debut calls to mind the great storytellers of displacement and arrival who have come before her–from Zadie Smith to Monica Ali to J.M. Coetzee–while she tells a vivid, raw story all her own.” publisher
New York Times describes the novel as “Darling is 10 when we first meet her, and the voice Ms. Bulawayo has fashioned for her is utterly distinctive – by turns unsparing and lyrical, unsentimental and poetic, spiky and meditative… stunning novel… remarkably talented author”
Explore Zimbabwe further through these other novels found in the library’s collection.
Those Who Love Night (M)
by Wessel Ebersohn

“When Abigail Bukula, a young lawyer in the South African Justice Department, learns that the secret son of her aunt, who died in a massacre years ago, has been arrested by the Zimbabwean government, she races to his aid. She’s as determined as ever but perhaps a bit naive as well. Accused of being a part of the so-called Harare Seven, her cousin is being held as a political prisoner in the country’s most brutal prison. With only an eager young lawyer as an ally and a director of the country’s intelligence agency either helping her or setting her up, Bukula will not leave without winning her cousin’s freedom and learning what really happened to her aunt so many years ago. By cunning, by bribery, by sheer audacity—and with the help of her friend prison psychologist Yudel Gordon—Abigail is determined to prevail in Those Who Love Night, Wessel Ebersohn’s explosive follow-up to his critically acclaimed series debut.” publisher
The Hairdresser of Harare (M)
by Tendai Huchu

“Like very good dark chocolate this is a delicious novel, with a bitter-sweet flavour. Vimbai is a hairdresser, the best in Mrs Khumalo’s salon, and she knows she is the queen on whom they all depend. Her situation is reversed when the good-looking, smooth-talking Dumisani joins them. However, his charm and desire to please slowly erode Vimbai’s rancour and when he needs somewhere to live, Vimbai becomes his landlady. So, when Dumisani needs someone to accompany him to his brother’s wedding to help smooth over a family upset, Vimbai obliges. Startled to find that this smart hairdresser is the scion of one of the wealthiest families in Harare, she is equally surprised by the warmth of their welcome; and it is their subsequent generosity which appears to foster the relationship between the two young people. The ambiguity of this deepening friendship – used or embraced by Dumisani and Vimbai with different futures in mind – collapses in unexpected brutality when secrets and jealousies are exposed. Written with delightful humour and a penetrating eye, The Hairdresser of Harare is a novel that you will find hard to put down.” publisher
The Boy Next Door (M)
by Irene Sabatini

“In Bulawayo, Zimbabwe, there is a tragedy in the house next door to Lindiwe Bishop–her neighbor has been burned alive. The victim’s stepson, Ian McKenzie, is the prime suspect but is soon released. Lindiwe can’t hide her fascination with this young, boisterous and mysterious white man, and they soon forge an unlikely closeness even as the country starts to deteriorate. Years after circumstances split them apart, Ian returns to a much-changed Zimbabwe to see Lindiwe, now a sophisticated, impassioned young woman, and discovers a devastating secret that will alter both of their futures, and draw them closer together even as the world seems bent on keeping them apart. The Boy Next Door is a moving and powerful debut about two people finding themselves and each other in a time of national upheaval.” publisher

Read Your Way Around the World - Zimbabwe
https://haligonia.ca/read-your-way-around-the-world-zimbabwe-84196/