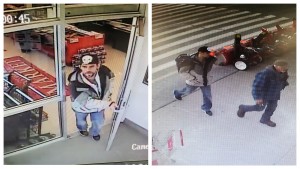 Halifax District is investigating a string of recent thefts that occurred within an hour of each other in the Hammonds Plains and Tantallon areas. 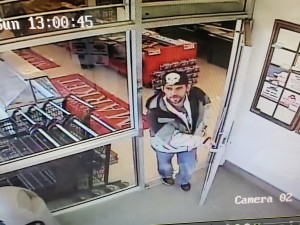 At approximately 1 p.m. on January 13, a man entered a business in Hammonds Plains with a blue cooler bag and was seen placing items in the bag. When confronted by security, he returned some of the items but left with unpaid items. Shortly after, the suspect went into a nearby pharmacy and stole four decorative rings. 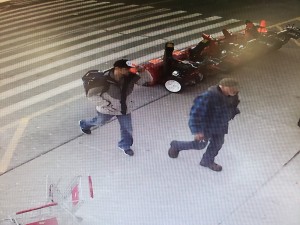 He then entered a business in Tantallon with a second suspect and placed a pair of orange Timberland sneakers in a cooler bag before leaving.  It was later determined that two pairs of dark colored Nike sneakers (size 11 and 10.5) were also stolen.

The suspects were seen leaving the Tantallon business in an older model Chrysler Intrepid, red/maroon in color.

One of the suspects was wearing a black, beige and white winter coat, blue jeans, black and white sneakers and a black hat. The second suspect was wearing a ball cap, a blue and black jacket and jeans.

Anyone with information about these crimes is asked to contact Halifax District RCMP at (902) 490-5020. Should you wish to remain anonymous, call Nova Scotia Crime Stoppers toll free at 1-800-222-TIPS (8477), submit a secure web tip at www.crimestoppers.ns.ca, or use the P3 Tips App.

The investigations are ongoing.

Recognize these people? Thefts from three businesses within an hour
https://haligonia.ca/recognize-these-people-thefts-from-three-businesses-within-an-hour-255894/