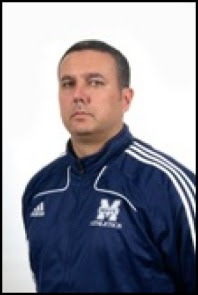 Mark Forward Named Head Coach of MSVU Women’s Basketball
Mount Saint Vincent University took the first step towards moving forward after the unexpected death of basketball coach Dyrick Mcdermott 2 months ago, appointing Mark Forward as their new head coach of women’s basketball this past week.
Forward is a gradute of the Mount and was the school’s first CCAA all star in 1991 as a member of the Men’s basketball team.
As a coach, Forward had several successful years in the late nineties coaching the men’s program at Dal Tech, before joining Rick Plato with the men’s team at the Mount where he has coached the last nine years.
Forward was a close friend and former teammate of Dyrick Mcdermott’s. He takes over the reigns of the program with a heavy heart. Speaking on CKDU Sports this past monday, Forward commented on his personal struggle with the loss of Mcdermott. ” It’s hard to talk about..it’ surreal. There were not too many days over the past 20 years where I did’nt see or talk to Dyrick. That void that’s there is very difficult. He was my best friend, our little boys were best friends. I’m sad for his family, it was just so unexpected.”
After asking Coach Forward about following up on Mcdermott’s legacy of unbelievable success on the basketball court, Forward suggested his old friend was sticking it to him one more time. “A mutual friend of mine and Dyrick’s have joked that Dyrick is still managing to give us a hard time!”
Forward admitted to feeling pressure taking over the traditionally strong program, having been involved for nearly a decade with the dominant Mystics men’s team. “I feel the pressure, but that’s what drives you to succeed. I’m going to give it my best effort, and I have Dyrick as motivation to keep the winning going,” said Forward over the phone.
I’m sure Coach Mcdermott would be very pleased that his best friend is taking over his program, and I’m pretty sure the entire basketball community will be cheering for Coach Forward and the players at the Mount, who called Coach Mcdermott their friend and mentor.
I was not a friend of Dyrick Mcdermott, but I wish I had been. I have a feeling my life would have been that much more richer. Although, if I had been, that late April weekend would have been even more heart breaking than I already found it.
I met Coach Mcdermott in January when he agreed to let me do a story on his women’s basketball team at MSVU. Not only was he courteous and helpful, he was a great interview.
Over the winter he bacame a regular on my CKDU sports show and always gave me great insight and thoughtful opinions.
I found out about Coach’s death just before I went to work that night. Concentrating on my job was very difficult, and as I went from emotion to emotion, thought to thought, I realized how hard his death must be for people who actually called him a coach, friend, father or husband.
This guy was a great man. A far better man than me, and probably a better man then most of us. His death is tragic and sad, and a lesson for all of us to enjoy every day we have on this planet, and make the most of it. Because at any moment, it could all come to an end.