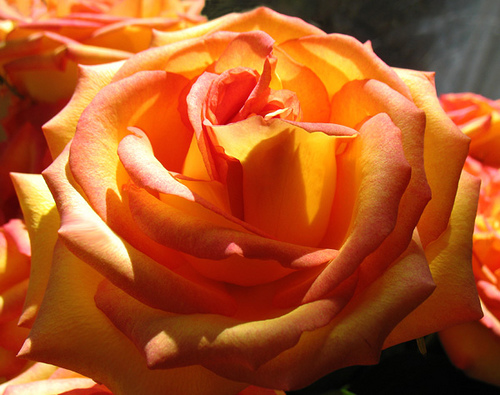 In the end, it came down to a dark, dim room,
a clock ticking, two women.
One sitting, waiting, watching, listening.
Nervous. Grieving.
Not sure what she is feeling.
One very still, not here, not there, breast rising, falling, breath in, breath out, breath in……

Their hands linked. I was listening to the seconds ticking by.
Sitting watching Xue.

It was as simple and quiet as that.
I went to the nurses station to tell them, and started to cry. It was over.

They asked me if anyone would want to be called to come in and see her……..No, there was no one. I left the ward. The hall was a million miles long. I felt like I was walking in slow motion.
Left the hospital. Made some phone calls in the parking lot and drove home.

Twenty four hours earlier, around 10 PM, during the raging storm, we had been headed to the Emergency room. Xue in terrible pain. Lightning sparking crackling and thunder announcing the arrival of our ambulance.

By 3am Sunday, Xue had a room in the hospital.
Lovely soft pink.
Pain meds were administered and she fell away into a deep blissful peace.
Thank God.

A few people came in to visit and sit with her throughout the day.

I don’t know. It has been quite a long journey from beginning to end. One I had no idea I was getting into.

Tomorrow is her funeral.
Yesterday was visitation at the funeral home. There were many, many people. Lots of Chinese folk. I was surprised. I wondered where they all had been when she was so sick. Some of the crowd I know, was because of the stature of her deceased husband. He was a good man and well liked. I was really surprised at how many people were paying their respects. Incense was burning, there were magnificent flower arrangements with white ribbons written in Chinese characters. I was given some “lucky” money as I left.

It is strange to look over at her house. The outside light has been on since she died. Her old mum keeps it on. She cannot go to the funeral. She did not go to the visitation. She left the hospital after a short visit because she could not see her daughter die. It is very bad luck. It is not allowed for an older person to see a younger family member dead.

Today, Jennifer, Xue’s daughter is eleven years old and lives with a neighbor of mine who has a daughter the same age. She is doing well! Happy and contented. I see her all the time. Xue’s two brothers and their families, now live in Canada and Xue’s mum lives with them. Xue died of breast cancer that eventually spread to her bones and liver. I am going for my annual mammogram on Monday. Please don’t put off getting yours done.