A couple of days I ago I just happened to be glancing at the old A Year of Puppies calender when I realized that I had not made a post on Hello City since July, the puppy of that month being a Golden Lab named Troy. 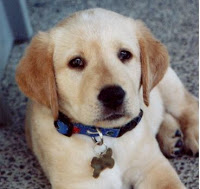 I figured it was about time I stopped being so lazy, buckled down and hucked a few vain, pretty words into the vast screeching void that is the internet. Okay that’s not actually what happened. I don’t have a puppy calender (dammit) and the lack of posting has not been entirely due to laziness. Oh don’t get me wrong, I’m fucking lazy, but there are other reasons I have disappointed you my beloved and at this point, totally non-existent fan base. I spent most of August either working or fighting with banks and governments in order to rustle up enough scratch to pay for my move to Vancouver and twelve months at Vancouver Film School. I was also fortunate to experience a myriad of technical issues, the most serious of which left me without my computer or internet access for roughly six and a half weeks. So yeah…that kind of puts the kibosh on the whole blogging thingy. Nonetheless I have arisen semi-triumphant!
And not a moment too soon for in just two months I shall slip past the majestic ramparts of the Rockies and trade the hard scrabble prairies for the lush, rocky shores of southern coastal British Columbia. Ahhh Vancouver, a land of seemingly infinite opportunity and diversity. Not to mention unapologetic wankers. Scads of them in a dizzying assortment of varieties. Magnificent buggers the lot, so dripping with pretension and self-assuredness that you almost taste it wafting in the warm pacific breeze. And why not? In recent times this latter day Land of the Lotus Eaters has assumed the role once held by Toronto and Montreal as Canada’s cultural and fashion hot-spot. Savy media types, style conscious “artistes” and small business owners devoted to maintaining their independent ethos and clientele scurry out of every crack in the city’s slick modern facade. Beneath them are the scores of wide eyed frenzied dreamers, like myself, eager to secure a piece of the glittering golden dream the city and its entertainment industry dangles before our hungry eyes. And beneath them? The broken, the forgotten and the desperate who inhabit worn out streets which belong in war torn Sarajevo not the slick, evolving metropolis Vancouver likes to present itself as. All of these things have been mixed together in a giant rain soaked cauldron and sprinkled liberally with a healthy serving of East-West fusion sauce to produce a wondrous creation I am soon to call ‘Home’.