Spring Garden Rd Coffee News, the owner of the Ottoman cafe is opening Mid Point cafe in the recently vacated Second Cup. The Ottoman is for sale on Kijiji if anyone is interested.

The Tim’s on Spring Garden beside Park Lane will be moving into the Hakim Optical after they close at the end of the month. As well the three bidders were revealed on who wants to Operate the cafe space in the new central library. Pavia Gallery (of Herring Cove) Uncommon Grounds and Second Cup will find out in a couple weeks who will be the operator.

Lion and Bright the cafe by day, wine bar by night opened on Agricola, its an extension of Local Source Market.

Michael Kors will be opening a store in Halifax Shopping Centre this spring, and there seems to be abit of excitement over this development.

The Wicker Emporium in Mic Mac Mall is now gone.

Taco del Mar the American chain owned by the founders of Subway opened its first Eastern Canadian outlet on Dresden Row, where the Quiznos most recently was.

After 25 years the fixture of the #7 highway on Loon Lake, Hungry Jacks is closing.

HFXSports will open it’s doors on Monday. Ready to give the sports fan the ultimate bar venue.

Dartmouth had enough of Blizzards, the Cole Harbour Dairy Queen will not be reopening after their fire last year, and the Illsley avenue location in Burnside has also closed it’s doors. Mic Mac and Main St remain open in Dartmouth. 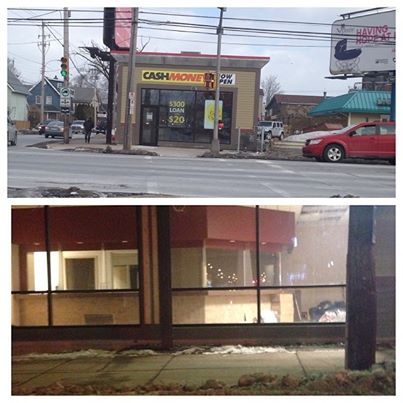 This gives me more heartburn than Robie Food ever did, CashMoney has opened on Robie at Young. Nothing quite classes up a neighbourhood like a protected area for their employees.Obviously though the clientele is there as this make the 3rd payday loan company within 200M of each other.

A CherryBerry started peddling it’s froyo in the Larry Uteck area of Bedford.

Jessy’s Pizza on the bottom of Wright in Burnside has closed. fun fact: That Jessy’s was the only HRM resto to have health closure in the last year.

Will they or won’t they? Urban Outfitter rumoured to be going in Barrington St. occupying the Former Sam the Record Man space. There appeared to be a confirmation of this on Tuesday just to have all parties deny it. So for now it is unconfirmed, a similar scenario happened when Forever 21 was announced.

One Tooth Yoga mysteriously closed up its Park Lane and Sunnyside stores, forwarding callers to their Newfoundland store.